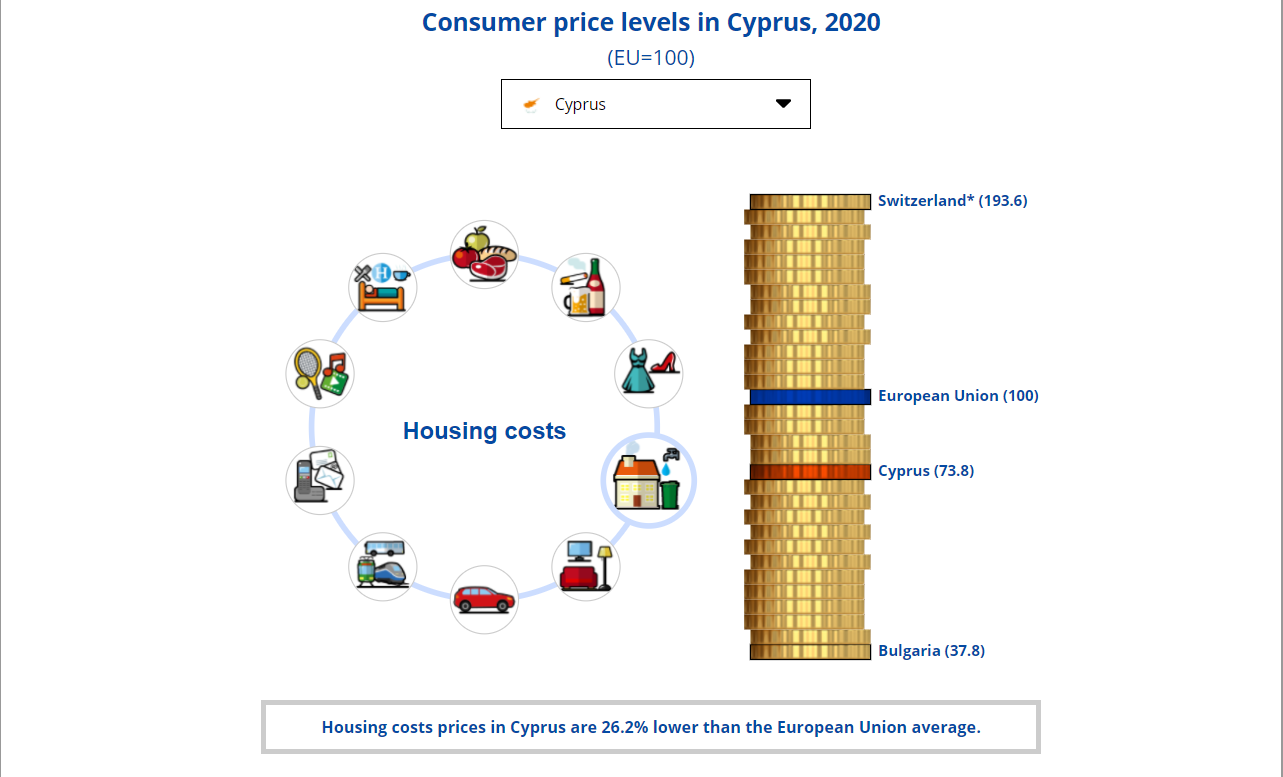 Cyprus is relatively cheaper than most EU countries with the exclusion of consumer prices in food, communication and furniture, according to an updated Eurostat data  released on Wednesday.

A user-friendly interactive graph by the European Commission allows internet users to compare consumer prices of ten different product categories of their country in relation to other non-EU and EU member states.

The data showed that consumer prices of the island were lower than the EU average in most product categories.

Clothing and footwear prices are 4.7% lower that the EU average, with the price level index (PLI) at 95.3%, compared with the European Union average at 100. Denmark is the most expensive with 130.9 PLI whereas Bulgaria, which holds the cheapest product prices in six of the categories, is cheapest with 75.6.

Restaurant and hotel prices in Cyprus are 12.7% lower than the European Union average with the island’s PLI at 87.3 in comparison with 100 in the EU. Bulgaria’s PLI was at 46.4 and the most expensive prices among EU member states were recorded in Denmark (135.5).

Cyprus’ PLI for recreation and culture activities was set at 91.3, scoring 8.7% lower than the EU average (100) while Hungary had the lowest index with 61.3.

Alcoholic beverages and tobacco prices in Cyprus are 9.8% lower than the EU average with Bulgaria having the cheapest prices with 60.8 and Norway, a non-EU country is the most expensive 219.7.

Transport services’ prices are also 4.2% cheaper than the EU average, while personal transport’ PLI was 14.5% lower than EU average.

With property prices recording a nationwide drop in the first quarter of 2021 according to a recent survey, housing costs are significantly lower (26.2%) than most EU countries. The lowest housing costs were in Bulgaria with 37.8.

The price level index of communications in Cyprus were at 9.7% above the EU average. The lowest prices for the category were recorded in Romania (45.9) and the most expensive ones in Norway (180.1).

Furniture and carpets prices were 2.8% higher with Bulgaria having the cheapest prices with a PLI of 55.2.

The price level index is calculated by dividing the Purchasing power parities (PPPs) by the current nominal exchange rate.