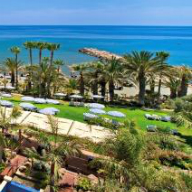 An international travel search engine has named Cyprus as the provider of the second most inexpensive accommodation amongst its European competitors.

The news comes amid widespread efforts to promote Cyprus tourism with the state and private sector pinning hopes on overseas visitors providing a lifeline to the still ailing economy. The trivago Hotel Price Index (tHPI) shows the average overnight accommodation prices for the most popular cities around the world. According to its March findings, Cyprus comes second only to Greece in terms of the cost of hotel accommodation in the European countries it competes for tourists with.

Greece's trivago website www.trivago.gr said: "Greece and Cyprus continue to keep the cost of a stay at their hotels this month at under €75," adding prices in other EU member states were higher. According to the figures, prices in Cyprus stood at an average of €75 per two-bed room per night this month as well as in January this year with an interim drop to €73 in February. The average in Greece this March is €73, compared to €72 in January and €71 in February. Portugal also comes close with €73 in January, €72 in February and, €77 in March, its first increase over Cyprus prices. Spain is also in the top five, with its hotels charging an average €82, €89 and €90 during the first three months of this year. The list also includes Italy with €102 in January, €100 in February and, €113 in March. France's average costs, according to the tHPI were €129, €121 and, €126.

Trivago is a travel metasearch engine focusing on hotels. The site compares prices of over 700,000 hotels from over 200 booking sites, such as Expedia, Booking.com, and Priceline.com.