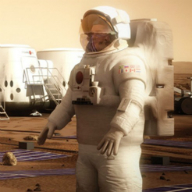 Cyprus is to apply to the Mars One project to host one of its simulation locations ahead of the 2024 first-ever mission to the Red Planet, an official at the commerce and tourism ministry said, citing the move as a great boost for the island’s tourism, and its space ambitions.

Each location will pose different possibilities and scenarios for testing astronaut candidates. Several regions around the world will be chosen for (psychological)testing and equipment testing for wind, dust, temperature, and isolation, all criteria, which Cyprus meets, according to officials.

A location for the Simulation Outpost Alpha has not been chosen yet and the project is open to applications from various countries. The simulation training may be turned into a reality TV show with the world voting for the first four-man team who will go to Mars.

He also said the island’s migration department has had a lot of experience in dealing with aliens and could be easily expanded but he deflected a question relating to their lack of experience in welcoming and integrating aliens rather than marginalising them and having them deported.

“Of course all of that is an issue forthe future,” he mumbled. “For now, hosting the Mars One simulation is enough of a start.”

Demetriades said companies in the field of satellite activities could use Cyprus as their base, while space technologies could be developed in Cyprus.

“Not only is Cyprus at the crossroads of three continents but it is also the centre of the universe, so what better place for a pioneering effort for the first trip to Mars,” said Exoginou.

He added that in a way Cyprus was also a crossroads between Venus and Mars “because it is a crossroads on Earth which is a crossroad between those two planets”, and because Venus was another name for Aphrodite who was born in Cyprus, it all made sense, he added.

“In a way, our stars are aligned for this very venture. Not since our former commerce minister Nicos Rolandis suggested a giant Aphrodite statue two decades ago have we come across an opportunity like this to increase tourism arrivals, terrestrial and extraterrestrial,” he said.