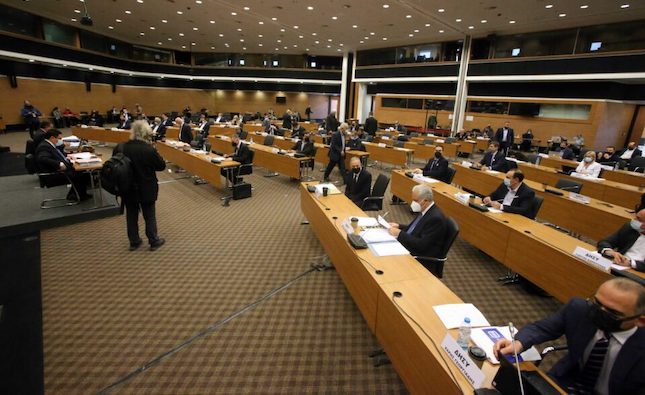 The announcement, contained in an addendum to a GRECO report released on Friday, coincided with the swearing in of the newly established anti-corruption authority at the presidential palace.

Harris Poyiadjis, a former judge, chairs the authority, and also hold the title of Transparency Commissioner.

The other members of the new body are: Michael Constantinides, former permanent secretary of the transport ministry; Eleni Patera Demosthenous, lawyer; Nicos Zambartides, accountant and former director of the Nicosia water board; and Tatiana Zachariadou, sociologist.

The authority will be the go-to body to report suspected corruption in the broader public sector. Its work will be guided by the standards set by GRECO.

GRECO (the Group of States against Corruption) is a Council of Europe body that aims to improve the capacity of its members to fight corruption by monitoring their compliance with anti-corruption standards.

Adopted on March 25 and circulated as a public document on Friday, the addendum assesses measures taken to implement the recommendations issued in the Fourth Round Evaluation Report on Cyprus, dealing with “Corruption prevention in respect of members of parliament, judges and prosecutors.”

The 11-page addendum notes that the recommendation addressed to the law office of the republic concerning the autonomy of prosecutors remains unfulfilled.

It will be fully satisfied with the promotion and adoption of the relevant bill concerning the independence and autonomy of the Law Office of the Republic, which is pending at the Ministry of Finance.

“In particular, GRECO notes that work on legislation relating to the Law Office of the Republic has not progressed further and the authorities are urged to accelerate this procedure with a view to strengthening the independence/autonomy of the prosecutorial functions,” it said.

As regards MPs, GRECO welcomed the adoption of the Code of Ethics for parliamentarians covering integrity-related matters, which was a long-awaited development.

The new Code of Ethics provides guidance on conflicts of interest and gifts and contains rules of relevance to integrity, it said.

But it expressed regret that important issues such as contacts with third parties and lobbyists, accessory activities and post-employment situations have been left out of the Code, which should be the reference document for ethical standards for parliamentarians.

“That said, GRECO welcomes the adoption of the Law on Regulating Lobbying, which includes obligations for MPs to report contacts with registered interest groups and representatives and regulates their contacts with them,” the report said.

GRECO also welcomed that compliance with the Code is to be monitored by a specific Parliamentary Committee, the Committee on Ethics.

At the same time, it underlined that the success of the Code will depend on its effective enforcement, including the application of sanctions in case of breach.

The publication of a handbook for parliamentarians and the preparation of seminars to raise awareness on the Code of Ethics are also positive developments.

GRECO encouraged the House of Representatives to pursue its efforts for promoting the Code.

But it noted that in contrast, little progress has been made regarding the reform aiming at clarifying the income and various allowances received by MPs as well as the regime of asset declarations.

With regard to judges, all recommendations have been complied with.