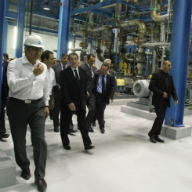 The island's sixth desalination plant, located at Vassilikos was inaugurated recently by President Nicos Anastasiades who said it marked a new era in Cyprus’ water policy, while he referred to efforts to strengthen ties with Israel.

The plant, which cost some €46m, can produce 60,000 cubic metres a day. The project is a venture between the Electricity Authority of Cyprus (EAC) and Israeli company IDE Technologies based on the EPC (Engineering, Procurement, Construction) concept. This effectively means the EAC received a ‘turnkey’ desalination plant.

The initial deal was signed in 2009 and the plant should have been operational by February 2012 but the explosion at Mari naval base, adjacent to Vassilikos destroyed most of the work done until that point.

“The desalination plant inaugurated today, along with units already operating and those already upgraded, guarantee that Cyprus will not face the problem of drought again. The disruption of water supply is now an out-dated phenomenon in the history of Cyprus.”

But, he said, the government’s water policies did not end with creating desalination units.

Anastasiades said it was promoting the use of other non-conventional sources of supply such as the treatment of wastewater for irrigation of agricultural crops and underground aquifers. The government was also promoting the planting of crops that consumed less water, and working on raising awareness of water conservation.

“Ensuring the supply of water is an integral component of the infrastructure of our country… because it contributes to further development of agriculture and tourism,” he added. Large water projects also had enormous social and economic benefits. Cyprus could learn a lot from Israel on the importance of technology, Anastasiades said.

“We hope that soon we will have the opportunity to launch several other projects that will be undertaken jointly by various agencies, both public and private sector in Israel and Cyprus, which will result in increased prosperity for both countries, as the example of cooperation between the EAC and IDE has shown,” he said.

The government, he added, was committed to further broadening of relations with Israel and said the country’s Prime Minister Benjamin Netanyahu would be visiting shortly.