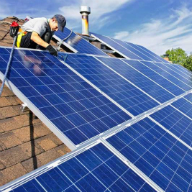 The electrical connection between Cyprus, Israel and Greece through Eurasia inter-connector would improve the potential of Cyprus and Israel to further develop renewable energy sources (RES), said Eitan Parnass, Director General & Founder of the Green Energy Association of Israel and secretary of Global Solar Council.

Parnass was speaking at a presentation in Nicosia, organized by the Embassy of Israel in cooperation with the Ministry of Energy, on ‘Green Energy Market in Israel-Cooperation Opportunities’.

In his presentation, he spoke about the prospects and the potential of solar energy market, especially by developing new technologies that will allow the storage of solar energy and its use even when there is no sun.

He referred to pilot energy storage projects developed by companies in Israel and how Cyprus could benefit from the technology which Israeli companies have developed in the field of RES. In this area, he added, Cyprus and Israel could develop further cooperation, since there are Israeli companies interested in investing in renewable energy in Cyprus. He stressed the importance of RES for Cyprus and Israel, since the countries have isolated electricity systems, largely dependent on fossil fuels.

Speaking at the event, the Ambassador of Israel to Cyprus Yael Ravia Zadok, said that the area of green energy is one area where there may be further cooperation between Israel and Cyprus, in order to lift their energy isolation and there will be one of the issues to be discussed at the upcoming trilateral meeting between Greece-Cyprus-Israel on Thursday in Nicosia.

Deputy Director, of Energy Service of the Ministry of Energy Constantinos Xichilos referred to the existing cooperation agreement between Israel and Cyprus on RES.

He noted that Cyprus and Israel have much in common in terms of the electricity market and that the development of Eurasia interconnector could eliminate energy isolation of the two countries. He said that there are very good prospects for cooperation with Israel and use of the knowledge gained in the country around renewable energy.