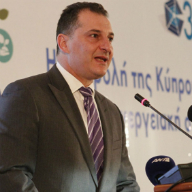 Cyprus aspires to become in the long run an alternative provider of energy to meet EU needs, says the Energy Minister.

Energy Minister Giorgos Lakkotrypis was speaking at the 3rd Cyprus Energy Symposium in Nicosia focusing on ‘The Role of Cyprus in the New European Energy Strategy’ and covering a variety of issues such as oil and gas exploration, regional oil and natural gas markets, electricity markets as well as renewable energy sources (RES) and energy efficiency.

In his address, Lakkotrypis said that in light of recently confirmed statements of natural gas quantities in Block 12 and amid expectations of fresh discoveries in the region, it is certain that natural gas would enter the country’s energy equilibrium and contribute to the growth and prosperity of the island.

He stressed that major infrastructure projects need to be undertaken in Cyprus, noting that transporting the offshore reserves via pipeline to Cyprus and constructing an LNG plant constitute a strategic choice for the government. Israel’s Energy Minister Silvan Shalom, also expected to speak at the two-day event, was absent.

Addressing the symposium, Greek Minister of Environment, Energy and Climate Change Yiannis Maniatis expressed his conviction that Cyprus, Israel and Greece could be the new supply hope for Europe. Maniatis said the EU imports 60% of the natural gas it uses, 80% of oil and 50% of the carbon it consumes. Until 2013 this dependence on natural gas and oil, he said, will exceed 80% and 90%, respectively. “It makes absolute sense that Cyprus, Israel and Greece can become the new supply hope of Europe,” he said.

Cyprus’ Minister for Agriculture and the Environment Nicos Kouyalis meanwhile said Cyprus and Israel are putting the finishing touches to a bilateral environment agreement aiming to address any problems created due to offshore activities related to hydrocarbons that could threaten both the marine and coastal environment of the two countries.

George Shammas, head of the Cyprus Energy Regulation Authority (CERA) noted that Cyprus lacks a long-term and concrete energy strategy. Hesaid the absence of a published energy policy, analysing the various aspects – not just hydrocarbons, but also RES, the environment, security of fuel supplies – has led to a great deal of confusion and misunderstanding of the subject among the media and the public alike.

He cited the example of “simplistic” analyses that have seen the light of day, comparing the proposed construction of a pipeline running from Cypriot gas fields to Turkey, to the mooted onshore LNG plant. Since in absolute terms the pipeline cost much less than the LNG plant, various commentators have jumped to the conclusion that the former is preferable, said Shammas. But, he added, one also has to factor in the market flexibility of LNG as well as the higher prices LNG can fetch.