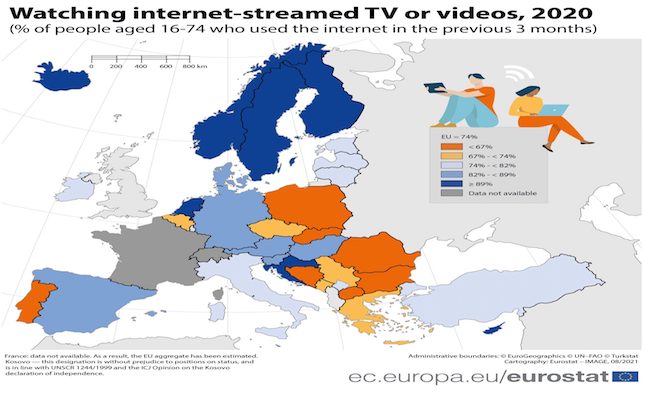 Cyprus joint top in EU in streaming TV and video

Cyprus jointly ranked top amongst EU countries for the share of population who streamed TV or videos in 2020.

Cyprus and the Netherlands both recorded a rate of 95%, according to a Eurostat (the EU’s statistical information body) report published on Thursday. The EU27 average was 74%.

Cyprus’ chart-topping figures was followed by Finland and Malta at 93%, while the lowest share was observed in Bulgaria (44%) and Romania (37%).

Cyprus’ rise amongst the charts for tech use has been a trend for some time now, as in 2016 that figure was 81%.

Eurostat said that in 2020, 75% of those aged 16 to 74 that used the internet in the previous three months read online news sites, newspapers, and news magazines, while 74% watched internet-streamed TV or videos.

The shares were lower for listening to music (61%) and playing or downloading games (34%).

The Netherlands had the highest share of individuals playing or downloading games (56%). Malta and Denmark had the second most significant shares (both 47%). In Bulgaria and Poland, these shares were below 20%.

In Cyprus the figure for playing or downloading games was 38%.