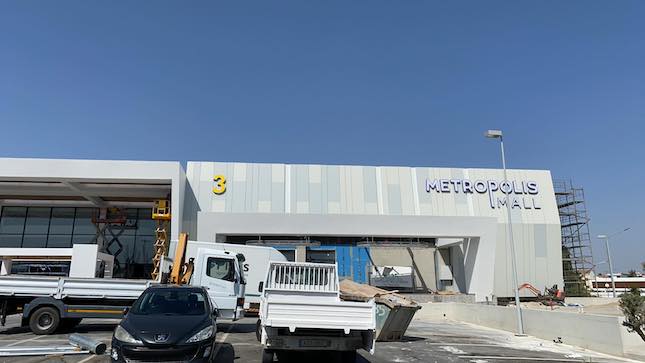 Cyprus’ largest mall, the Metropolis in Larnaca, costing €85 million to build, opened its doors on Thursday following delays due to the coronavirus pandemic.

Initially scheduled to open at the end of 2020, its opening was postponed due to a slowdown caused by coronavirus restrictions, but now South Africa’s Acsion Group behind the project is relieved to see their project finally take off.

Talking to the Financial Mirror, Metropolis Mall marketing consultant Marilena Palazi confirmed the majority of the 135 stores had opened their doors, welcoming clients, while the rest will be opening in the days to come.

Palazi said that the Metropolis Mall adds value to the town’s growing commercial sector, complementing other major development projects like the Larnaca Marina and new hotels.

“The next few years definitely belong to Larnaca, with the Metropolis Mall making that future a little brighter,” said Palazi.

“The mall has definitely upgraded the town. The road network in the area has been improved with the company’s contribution, while the value of properties has increased by 15-20% almost overnight.”

Palazi said the project creates hundreds of local jobs with new stores looking to hire a minimum of 4 people each.

She said an estimated 1400 people would be permanently employed at the mall, while job positions range from sales representatives to store managers.

“Some stores have a new philosophy, new technologies such as self-checkout counters, and new more enjoyable shopping opportunities leaving customers happy and relaxed.”

The mall is behind Larnaca’s military training camp (KEN) and opposite the new GSZ Stadium parking lot.

Metropolis Mall is single-level and has six different entrances to avoid congestion, offering easy access for people and families with mobility difficulties.

More than 750 new trees have been planted, walkways and bike paths have been built around the perimeter, offering shoppers a different experience.

The mall also has a covered dining area, benches inside and out, and a playground offering families various entertainment options.

Metropolis Mall has 1,450 parking spaces, two-thirds of which are underground.