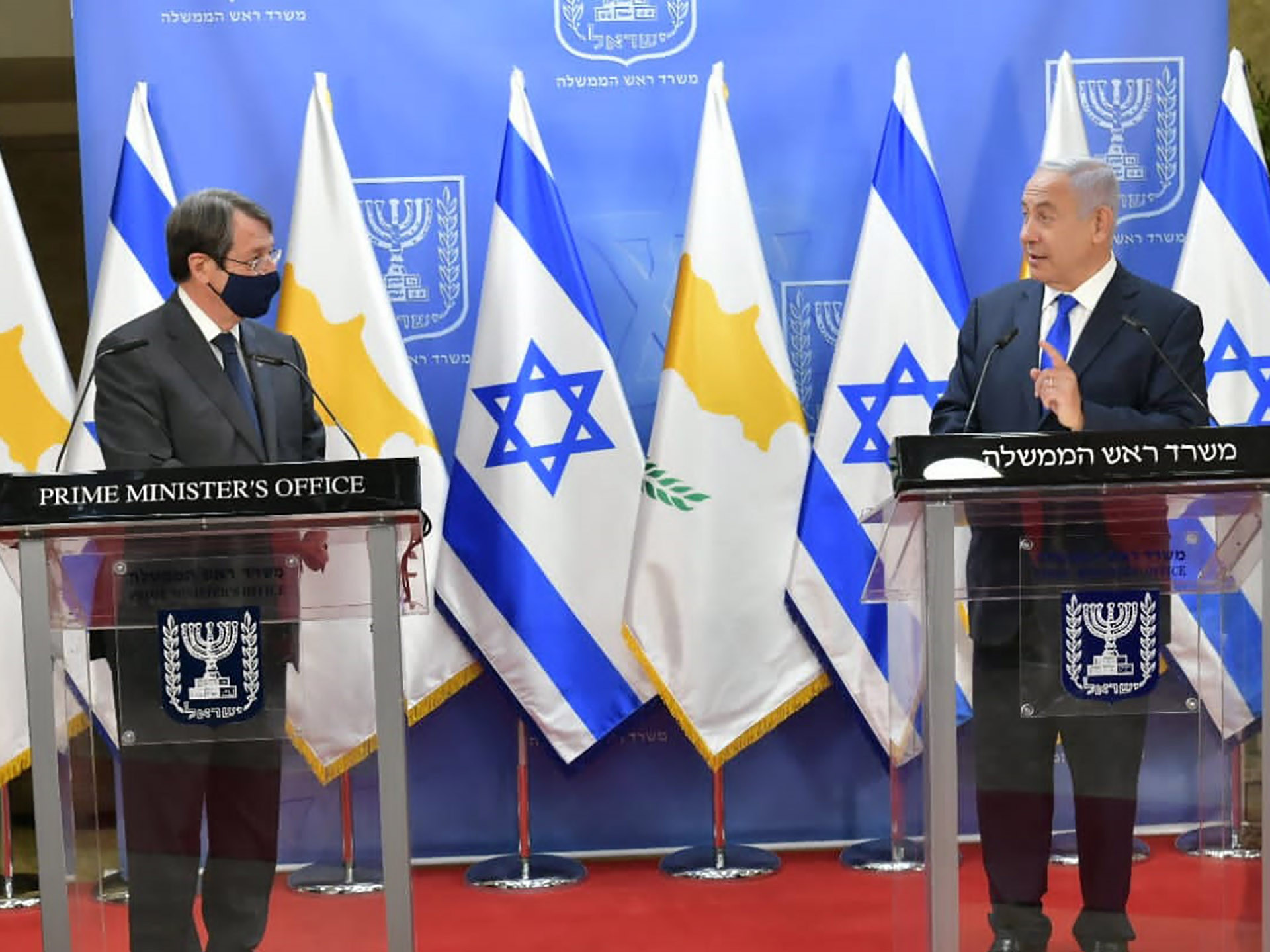 Cyprus will remove all quarantine restrictions for Israeli travelers visiting the island from April 1, as part of the ‘Green Passport’ initiative, President Nicos Anastasiades announced after meeting Prime Minister Benjamin Netanyahu in Jerusalem on Sunday.

With 300,000 Israeli tourists choosing Cyprus for their holidays in 2019, the third biggest market after the U.K. and Russia, the island’s authorities want to restart the travel industry as early as possible in order to kick-start the stalled economy, with arrivals in 2020 dropping by 85% from the year before.

The Cypriot leader also said that he was keen to find out more about the new Covid-19 treatment developed at Tel Aviv’s Ichilov Medical Center, especially since both countries have already agreed that Cyprus will take part in the clinical trials.

Speaking after their meeting that concluded a full day’s agenda, Netanyahu said that the two countries cooperate in fields of energy, water, tourism, public security and emergency services.

“Our medical cooperation has grown over the years, but the common battle against Covid-19 has energised that important cooperation,” he said.

“This opens up the possibility of starting tourism in the near future, it is not going to open in the next few weeks but it will open not far away,” Netanyahu said.

In his comments, Anastasiades said that vaccination is an extremely important tool in halting the pandemic.

“By increasing the number of people vaccinated, we can reduce the numbers of those affected, hospitalisations and deaths and, in turn, help reduce the burden on our medical system,” he said, praising Israel’s speedy rapid vaccination rollout, that will see 3 mln people inoculated by March 1.

“About half of the eligible Israeli population has now been fully or partially vaccinated, while older and vulnerable groups are already seeing a significant drop in Covid-19 cases,” the Cypriot president said.

“An agreement has been reached between our two competent authorities, with which, from April 1, Israeli citizens who have been vaccinated with a vaccine approved by the European Medicine Association will not be required to take a PCR test to travel to Cyprus and will not be placed in quarantine upon arrival.”

Anastasiades added that the agenda included the further strengthening the partnership in the field of energy, with a special focus on joint projects, such as the EastMed natural gas pipeline and the EuroAsia Interconnector electricity cable to Europe, expected to be ready in December 2023.

Energy Minister Natasa Pilides confirmed the talks on energy issues, with her Israeli counterpart Yuval Steinitz commenting that “this was an excellent opportunity to continue to coordinate the promotion of the Israel-Europe gas pipeline, the interconnection of the electricity system between the countries and the attempt to reach an agreement on the Aphrodite natural gas reservoirs.

“Cooperation between Israel and Cyprus in the field of energy has never been better,” Stenitz said.

On the geopolitical front, Anastasiades said that the Israel-Cyprus-Greece trilateral cooperation, that recently the involvement of the United States as well, will “continue and further pursue under the new US administration.”

“There is indeed a changing tide on our wider region, in which American mediation has been of critical value with the signing of the historic Abraham Accords, marking a paradigm shift in regional dynamics.

“At the same time, Cyprus will continue to endorse and support efforts in assisting the return to direct and meaningful negotiations aiming at resolving the Israeli-Palestinian conflict and fostering long-term peace.”

Welcoming his Cypriot counterpart Nikos Christodoulides to the Foreign Ministry in Jerusalem, Gabi Ashkenazi said, “we highly appreciate the government of Cyprus and the President’s decision to open the skies for tourism to both countries and we are in the process of writing the protocol on how to do it, and for the recognition of the Israeli vaccine protocol.

Earlier in the day, Anastasiades’s first meeting was with President Reuven Rivlin, with the Israeli host welcoming the agreement that will allow the renewal of flights and tourism between Israel and Cyprus.

“Israelis love Cyprus so much, and call more countries to adopt the Green Passes. In addition to our warm bilateral relations, our strategic trilateral cooperation with Greece, especially in the energy sector, is a key component of regional stability and economic development.

“In light of this close cooperation, we must continue to work together and not let anyone undermine our regional stability,” Rivlin said.

In his response, Anastasiades said, “we hope that soon the epidemiologic condition in both our countries will allow us to resume the flow of visitors between Cyprus and Israel since I firmly believe that this solidifies our friendly ties.”