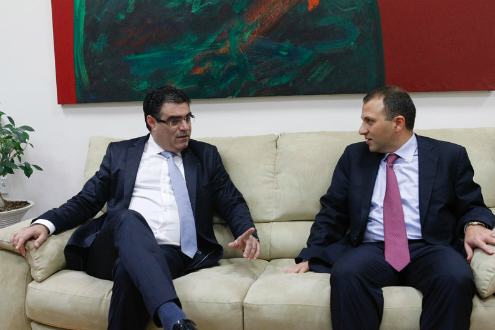 Cyprus is looking into the possibility of transferring water from Lebanon, either by ship or pipeline, to lower the cost of agricultural production, says Agriculture Minister Nicos Kouyialis.

Speaking after a meeting with the Lebanese Minister of Energy and Water Gebran Bassil in Nicosia, Kouyialis said Lebanon had submitted a proposal to transfer water to Cyprus. According to the Cypriot minister, a joint technical committee of technocrats from Cyprus’ Water Development Department and the corresponding Lebanese department has been set up to examine the possibility of transferring water for agricultural purposes from Lebanon to Cyprus. The committee will look at the economic benefits, or not, of such a move, examining both water transfer by ship and pipeline, to see which is the most advantageous. The study will take around three months. Within the first quarter of 2014, “we will know if it is in our interests to bring water from Lebanon”, said Kouyialis, adding that the move could prove “very beneficial” for Cyprus.

Lebanon is currently in the process of constructing a number of damns. “It has plenty of rainfall, and they are seeking ways to deliver water to their neighbours,” he said. At the same time, he argued, Cyprus needs to reduce the production cost of water in order to further developits agriculture and make it more competitive. “The cost of water in our country is very high, the desalination plants produce at ahigh cost and we need to see how we will reduce this cost,” said Kouyialis. “The aim is to develop agriculture, put it on a scientific and professional basis. We need to help agriculture and reduce the cost of production,” he added.

Water from Lebanon will mainly be used for irrigation purposes, the minister said, adding: “Desalination is for drinking water…producing water from desalination is very expensive, it costs around €1.30 per cubic metre, and does not pay to use for agricultural purposes.” “Today there are other methods, such as in Israel, where they utilise wastewater for agricultural purposes at a very low cost. We want to do the same, use wastewater, in parallel with other actions, like transporting water for agriculture,” he said.