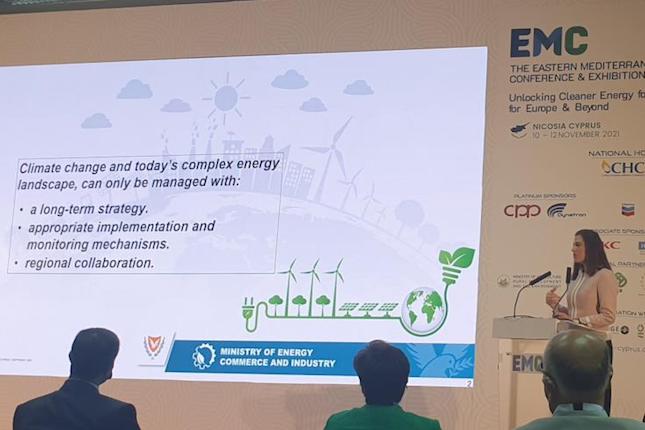 Cyprus must move quickly to implement the projects necessary to meet the objectives mandated by the EU’s Green Deal and simultaneously lower electricity prices, Energy Minister Natasa Pilides said on Wednesday during a speech at the Eastern Mediterranean Conference in Nicosia.

The three-day EMC event focuses on a wide range of crucial issues related to the environment, energy, international trade and issues concerning the Eastern Mediterranean region.

“Of course, we are very ambitious and very committed to the Green Deal, but we must acknowledge that we have to go through different steps to reach the stage where we will have achieved the goals,” Pilides said.

During her speech, Pilides presented a number of projects that seek to end Cyprus’ energy isolation.

The first project mentioned was the EuroAsia and EuroAfrica Interconnectors, which involves the interconnection of Israel, Cyprus and Greece’s electricity grids (via Crete), with a high voltage direct current (HVDC) offshore cable.

The other two projects included the LNG import terminal at Vassilikos, a project that has received political and financial support from the European Union, as well as the EastMed pipeline, estimated to require five years to complete.

Pilides explained that these measures and projects must be done at a very fast pace so that Cyprus can achieve its goals without endangering its energy security.

“What we need is long-term measures, such as funding programmes that will allow people to install photovoltaic systems in their homes and businesses, to increase their energy efficiency with environmentally friendly technology so that we can achieve our goals but also reduce prices at the same time,” Pilides said.

Moreover, Pilides stressed that cooperation in the Eastern Mediterranean is crucial if the region is to become a leader in green energy and sustainable development, adding that natural gas will have a key role to play in the transition towards cleaner forms of energy.

Earlier this year, the gas forum’s members welcomed the European Union and World Bank as observers.