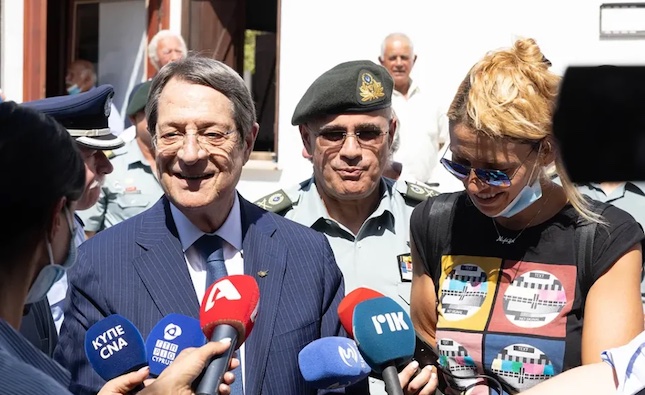 Natural gas explorations south of Cyprus and near Egypt’s giant offshore gas fields will resume in the latter part of next year with the energy companies involved reassuring Nicosia of their plans.

Speaking at the 8th Energy Forum in Nicosia, President Nicos Anastasiades said: “Unlike other parts of the world, the companies engaged in natural gas explorations are not only not cancelling or withdrawing from the Cyprus EEZ, but they are also actually rescheduling their plans for the second half of 2021.”

Noble Energy, the operator of the Aphrodite gas field, taken over by Chevron, has given reassurances they will continue with plans to send natural gas by subsea pipeline to the Idku terminal in Egypt and from there for export, Anastasiades said.

The president told delegates at the conference organised by the Institute of Energy for South East Europe (IENE) and FMW Media Way, that travel and health-related restrictions, reduced budgets of energy companies, mainly due to falling oil and natural gas prices because of the pandemic, have caused a dramatic decline in research activity worldwide.

“We are in constant contact with all the licensees, who assured us that they remain committed to their contractual obligations with the Republic and in this context, the companies ExxonMobil, Qatar Petroleum, Total and Eni, are rescheduling their drilling for the second half of 2021.

“Both companies [Noble Energy and Chevron], assured us that the planning for the exploitation of their deposit continues normally, based on the approved Production Plan, a plan that envisages that the gas will be transported by submarine pipeline to the LNG terminal in Idku, Egypt, for export both to Europe and internationally.

“I would like to assure our determination, despite any provocations, threats and illegal actions by Turkey, to proceed in the smooth implementation of our energy policy, based on our specific and targeted strategic planning.

“In exercising our sovereign rights, we will continue to upgrade our energy partnerships with the countries of the eastern Mediterranean and Europe, honouring our contractual obligations either to the states or to the companies, proceeding with the implementation of the highly significant agreements that the Republic of Cyprus has concluded.

“I would like to reiterate that Turkey is not excluded from the wider network of energy synergies that have been developed in the region and which promote security, stability and prosperity.

“What is, of course, the prerequisite, is the termination on its part of the illegal actions against both the Republic of Cyprus and a number of other countries, which in any case are in complete contradiction with the good neighbourly relations and the goals of the aforementioned collaborations.”