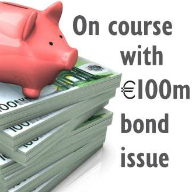 The government believes its first issue for up to €10m worth of 6-year retail bonds was a success and is continuing with the monthly issues, with the aim of raising some €100m every year, a supplementary amount to its own fiscal needs.

Finance Ministry officials at the Public Debt Management Office (PDMO) told the Financial Mirror that plans are also underway to offer the retail bonds to Cypriot individuals living overseas, similar to war bonds issued by the U.S. and other “patriotic” investment instruments considered by Greece soon after the crisis hit there six years ago.

PDMO officials say that the aim is not to compete with the commercial banks for deposits, but rather to tap into the money that left the system altogether last year when the harsh controls forced savers to resort to ATMs to withdraw their €300 a day allowance.

“Our aim is to offer an alternative investment tool and to show that stability is gradually returning to the money market,” one official explained.

Although the Cyprus Stock Exchange only received bids for only €7m worth of retail bonds last month, the PDMO is confident that this figure will gradually increase after the summer lull when investors are generally hesitant to place their money anywhere.

The government has already undercut commercial bank deposits by offering a heavily reduced 3% tax on interest, as opposed to 30% on all commercial and Cooperative bank fixed and term deposits.

With an initial interest of 2.75% for the first two years after the issue, rising to 5.75% in the final sixth year, the annual average after tax works out at an attractive 4%.

Interest is paid at the annual maturity of the date of issue and a bondholder may redeem at any time without any penalty, with only 30 days notice.  As with all retail bonds, these are only available to individuals who are permanent residents of Cyprus, regardless of nationality.

The application bids for the following month’s issue are accepted during the first 20 days of each month and the dates for the July issue started on Monday, June 2 and end on Friday, June 20.  The ceiling for the issue is €10m a month.

“There seems to be continued interest and Monday’s applications were very encouraging,” the PDMO official said, adding that just as with the previous retail bonds that were stopped in 2008, there is a specific clientele for these investments. He added that more and more people are inquiring about the bonds, both at the Ministry of Finance and the Cyprus Stock Exchange, which is acting as an accepting agent.

Meanwhile, the issue of the retail bonds are not aimed at raising funds at a time when the Cyprus government has not yet fully returned to the markets. “We have two debt issues of €85m and €500m coming up for repayment very soon, but we have our own funds in order to fully pay this debt and then some,” the PDMO official said, adding that the retail bonds issue is regarded merely as “supplementary” to other issues or funding as Cyprus’ fundamentals are improving better than expected.

According to the quarterly PDMO report for the period ending March 31, the weighted average cost for Treasury Bills fell from 4.72% (on average) during the previous quarter to 4,48% on average for Q1-2014.

The stock of short-term debt, in the form of Treasury Bills and Euro Commercial Papers, increased from €755m at the end of December 2013 to €795m at the end of March 2014.

The main redemptions in this quarter related to short term Treasury Bills and Euro Commercial Papers, which had been issued during the previous or the same quarter. On a gross basis, including rollovers, a total of €1.21b was redeemed during the quarter. Additionally domestic bonds matured in January and February for a total of €244m.