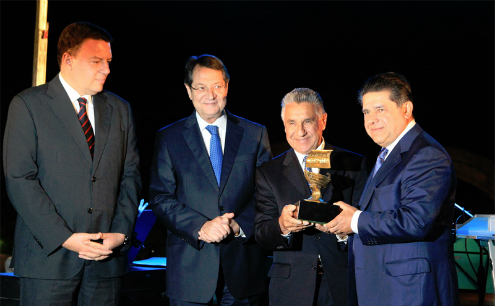 The shipping industry has been one of Cyprus’ most successful export services, as the country enjoys the privilege of being one of the most influential global hubs for ship owning and ship management services, with the island’s maritime capital, Limassol, being home to some of the world’s most important names in shipping, said President Nicos Anastasiades.

Addressing the opening ceremony of the Maritime Cyprus 2013 conference, taking place in Limassol, the President said that as a consequence of the Eurogroup decision on Cyprus, a number of shipping companies on the island have been affected, however the resident shipping industry has remained in Cyprus, demonstrating its confidence in the shipping industry and economy. The President said that Cyprus offers a number of fiscal and economic advantages in the shipping industry, which include competitive ship registration costs and annual tonnage taxes, favourable tax regime for ship management and other international business enterprises and generally low operational and construction costs.

Anastasiades said the island’s strategic location, its tax and legal system, its highly qualified and professional workforce in the fields of law, accounting and taxation, its maritime infrastructure as well as the long-standing mutually reinforcing cooperation between the public and private sectors of the industry, have contributed to Cyprus being ranked the eleventh largest merchant fleet worldwide and the third largest fleet in the European Union. “In addition, Cyprus is the Largest Third-Party Ship management Centre in the European Union and one of the largest globally. Further, around 150 internationally renowned Ship-owning, Ship-management, Chartering and Shipping related companies operate from Cyprus, controlling a fleet in excess of 2,200 ships, while the wider Shipping Sector employs approximately 4,500 employees and 55,000 sea-farers with high earnings”, the President underlined.

Cyprus, he continued, is internationally recognised for possessing a high quality and safe Registry, adding that the approval in 2010 by the European Union of its new upgraded specialised Shipping Taxation System strengthened considerably the image of the Cyprus flag and created sound prospects for the further development of Cyprus Shipping.