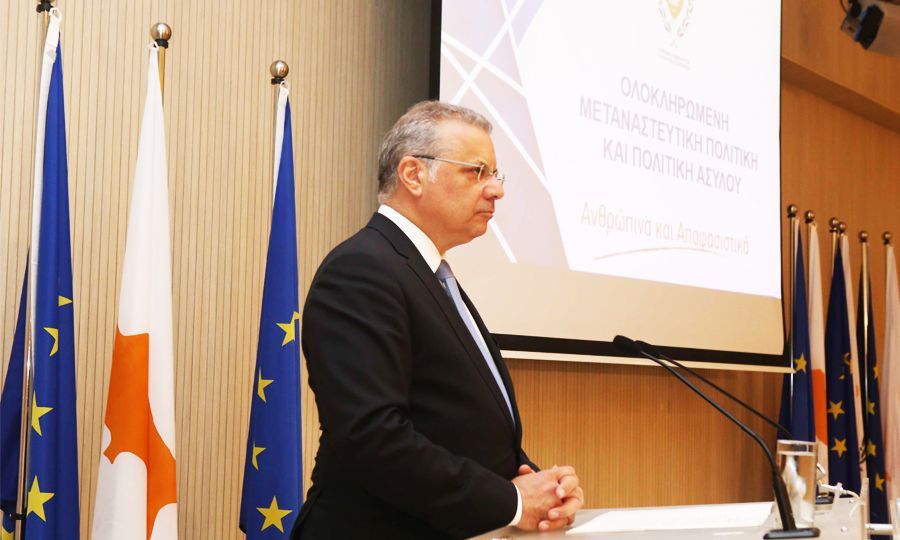 Republic of Cyprus Interior Minister Nikos Nouris is urgently seeking a constitutional amendment to shorten the time of due process for asylum applicants, calling a set of government-sponsored bills a “holistic approach” to immigration during a press conference on Thursday.

The minister, who spoke at a press conference on Thursday morning in Nicosia, said the government was pushing for legislation on the migration issue days ahead of a bigger debate set to take place at the European Union level.

“We need legislative tools to reduce the number of asylum applications as well as arrivals of all those who take advantage of the system,” Nouris said, adding that a number of EU countries were facing similar problems.

Nouris clarified that the government was asking the House to pass a set of bills that would cut down on the time of procedural due process. Due process for court appeals is protected in the Constitution, but the minister said long delays were defeating the purpose of dealing with large numbers of applicants.

Up to two months from start to finish

According to the minister, asylum applicants who file cases with Migration would be housed at a welcome centre until their cases are adjudicated, with the whole process taking about 50 to 60 days.

“We cannot, we don’t want, and we shouldn’t detain these people for long periods, even if they stay in welcome centres, as decisions have to be made and the process ought to be completed within a timeframe that we estimate to be 50 to 60 days, not some years as it happens today,” Nouris said.

The minister also announced that all asylum applicants with pending cases shall remain in a new detention facility, which he described as a “welcome centre” currently under construction in Menoyia, Larnaca district. The facility is expected to be completed by September of this year.

“As a government, we have a responsibility to provide conditions of security to all those who reside legally in our country,” Nouris said during the press conference.

The minister also wants asylum applications to pass a litmus test at the very beginning, pushing for non-bona fide cases to be adjudicated within two to three weeks, while also cutting down the appeal window from 42 to 10 days.

Nouris also said under a new system being sought, the Migration director would have the power to issue an immediate deportation order upon the rejection of an application.

Supreme Court out of the picture

The minister clarified the deportation would not be carried out until the appeal is officially rejected by an administrative judge but added this would occur regardless of any intention to file an appeal with the Supreme Court.

Nouris made references to ghettoization problems, poor living standards, and labour exploitation, saying his ministry was pushing for changes in order to address these issues while listing two schemes currently thought to be in use by non-bone fide asylum applicants, involving student visas and fake marriages.

From 2017 until 2019, there were 3214 students who applied for asylum applicants and another 2239 individuals in the same visa category married European citizens, according to the minister, who said “rightly they were classified as fake marriages.”

Under new procedures, Nouris says foreign nationals who want to obtain a visa to study in the Republic of Cyprus will first have to sign a declaration attesting they are not traveling to the island due to life threatening issues back home.

Students will also need to prove sufficient proficiency in the English language through a valid certificate or during an oral interview with an embassy or consular official.

Work for students only through school

Employment on a student visa won’t be permitted unless the work is related to the student’s field of study through an academic programme. No restrictions exist for individuals who have been granted asylum status, while reports show that employers are hesitant to get involved with frequent renewals of visas.

Nouris also said he was also sending a message to his European allies, calling on the EU to withhold funds from member states that refuse to accept refugees from other member states based on a plan to be discussed next month in Brussels.

He also said deportation flights would resume in the following weeks for applicants whose asylum applications have been rejected by Republic of Cyprus migration authorities.