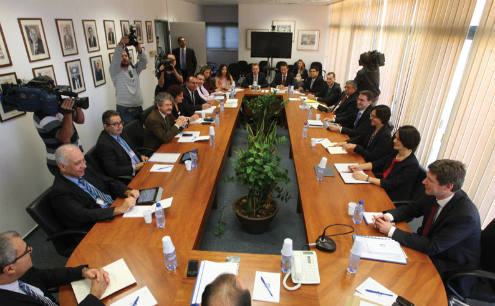 Cyprus’ bailout adjustment programme is on track but challenges remain following a third assessment of the recession-hit economy, reveal the Troika of international lenders.

Cyprus is tasked with restoring financial sector stability, strengthening public finance sustainability, and adopting public sector structural reforms. Troika’s latest evaluation focused on policies to restore confidence in the battered financial system and implementation of the structural reform agenda. “Cyprus’s programme remains on track, with the macro-fiscal outturn better than expected,” said a Troika statement recently. “Fiscal targets for 2013 have been met with considerable margin, due to both continued prudent budget execution and a less severe recession than anticipated,” it added. Output in 2013 is estimated to have contracted by about 6% in real terms, which, while significant, is almost two percentage points better than forecasted at the time of the last review, the Troika said.

“Private consumption contracted, although by less than expected, while tourism and professional services have proven resilient. The financial sector is also showing signs of stabilisation. The economy is adjusting flexibly as prices and wages are declining, helping to cushion the full impact of the recession on jobs. Still, unemployment remains very high.”

According to lenders, the Cyprus economy is expected to contract by 4.8% in 2014, with domestic demand weighed down by the need for an adjustment of private and public sector debt from currently high levels. “A return to positive but modest growth of around 1% is expected in 2015, led by non-financial services. Nonetheless, risks to the outlook are substantial.” Lenders said the first challenge for the financial sector is dealing with the high level of non-performing loans and the banks moving ahead with restructuring. “With key milestones in the authorities’ roadmap now completed, the second phase of gradual relaxations of restrictions is expected to start shortly.” There is also a need to continue to strengthen implementation of banking sector regulation and supervision as well as of the anti-money laundering framework. “The implementation of structural reforms needs to be accelerated.”

Nicosia was also urged to move ahead with privatisation of key state-own assets such as telecoms and electricity. “Privatisation of state-owned enterprises is essential to increase economic efficiency, attract investment, and as a means to reduce public debt. In this regard, the adoption of the framework law for privatisation is a key step to kick-start the process.” Conclusion of this review is subject to the approval process of both the EU and the IMF and is expected to be considered by the Eurogroup, and the IMF by early April. Its approval would pave the way for the disbursement of €150 million by the ESM, and about €86 million by the IMF.