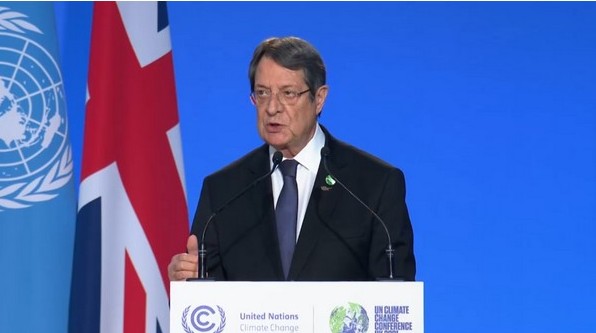 Cyprus, among 100 countries, pledged to halt and reverse deforestation and land degradation by the end of the decade, underpinned by $19 billion in public and private funds to protect and restore forests.

The leaders of 100 countries, including President Nicos Anastasiades, agreed on actions to end deforestation by 2030 at the 26th United Nations Conference on Climate Change, dubbed COP26.

The joint statement at the COP26 climate talks in Glasgow was backed by the leaders of countries including Brazil, Indonesia, and the Democratic Republic of Congo, which collectively account for 85% of the world’s forests.

According to a statement sent out by the office of UK Prime Minister Boris Johnson, more than 20 million square kilometres will be covered by the Glasgow Leaders’ Declaration on Forest and Land Use.

“We will have a chance to end humanity’s long history as nature’s conqueror and instead become its custodian,” said British leader Boris Johnson, calling it an unprecedented agreement.

In his address to the conference, President Anastasiades stressed the importance of working together to end climate change, noting that Cyprus and the broader Mediterranean region have already turned into a “climate change hot spot”.

“We have to be honest to strengthen our efforts in fulfilling our promises, there is no sign that we are growing back greener, since not only planetary warming is accelerating, but we are witnessing around the globe protracted heat waves, devastating fires and deforestation, increased water scarcity, droughts, floods and extreme weather patterns.”

The President said Cyprus remains fully committed to taking all necessary measures to achieve the Paris Agreement and the EU targets, for a 55% reduction in greenhouse gas emissions by 2030 and carbon neutrality by 2050.

“As a first step in accomplishing these ambitious but highly-needed goals, my country will allocate more than €500 mln until 2026, adopting new policies and measures as regards using cleaner fuels – such as natural gas and renewable energy sources – and promoting necessary investments in Transport, Agriculture, Industry, Land Use and Forestry and Waste Management.”

Forests are the lungs of our planet, absorbing around one-third of the global CO2 released from burning fossil fuels every year, but we are losing them at an alarming rate.

An area of forest the size of 27 football pitches is lost every minute.

In 2020 alone, the world lost 258,000 square kilometres of forest in 2020, according to WRI’s deforestation tracking initiative Global Forest Watch. That is an area larger than the United Kingdom.

This will support activities in developing countries, including restoring degraded land, tackling wildfires, and supporting the rights of indigenous communities.

CEOs from more than 30 financial institutions with over $8.7 trillion of global assets – including Aviva, Schroders and Axa – will also commit to eliminating investment in activities linked to deforestation.