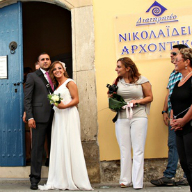 It's wedding season in Cyprus, and couples from the Middle East are jetting in, drawn not by the island's clerics and consecrated buildings, but rather the opportunity to marry without them as Cyprus has become the civil wedding destination for Middle Eastern couples.

In 1980, 61 Lebanese brides and 78 Lebanese grooms were married there, as well as 98 Israeli grooms and 99 Israeli brides. In 2013, there were 2,131 Israeli weddings, 581 Lebanese ones, and 35 Syrian unions. Some municipalities, such as tourist-friendly Livadia, report even more startling figures; last year, of the 1,000 or so weddings it recorded, 350 were Lebanese, 425 were Israeli, and 20 were Syrian.

"Once the war in Lebanon ended in the early 90s, mixed marriages between the various communities and religions started increasing gradually in Cyprus," says Maisy Khoury, a Cypriot wedding planner with Lebanese heritage. "For the past 10 years it's been a rising trend."

Dan Cristal, a wedding celebrant from Tel Aviv describes a similar tendency, albeit with different causes. In the 90s, the USSR allowed its Jewish citizens to emigrate to Israel. "A lot of these new arrivals weren't recognised as proper Jews by the rabbinical institutions," Cristal explains. "It was difficult for them to marry in Israel, so they chose to wed abroad." Today, parties from opposing nations fly into the coastal city of Larnaca peacefully.

"The Lebanon flight arrives at 7.30am; the Israeli one at 8am," says Dinah Martens, aDutch-born wedding planner who runs her own company, Cyprus Celebrations. "They get picked up in the same minibus."

In Cyprus, a marriage can be completed in a single day. What's more, no one asks after a bride or groom's denominations,and either side can seek a divorce, in contrast to many of the couples' home countries, where only husbands are permitted to file.

Martens says on going conflicts have stymied some plans. "I had my last Syrian in November. It's hard to get documents with the war."

Yet she continues to take bookings from Lebanon, Israel, Saudi Arabia, the Emirates, Iran, Iraq and elsewhere. "My favourites are the difficult ones," she admits, describing an Iranian-American marriage booked in for later that week. "The more complicated, the more I love it." Given the region, Martens could be in work for many summers to come.