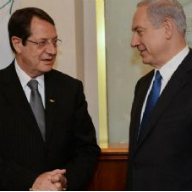 President Nicos Anastasiades and Israeli Prime Minister Benjamin Netanyahu recently had a telephone conversation, discussing a possible cooperation between the two countries in the field of energy.

According to a written statement issued by Cyprus Government Spokesman Nicos Christodoulides, Anastasiades and Netanyahu agreed that the Israeli PM will visit Cyprus the soonest possible.

“During their conversation the two leaders discussed issues of mutual concern, such as energy and a possible cooperation between Cyprus and Israel in this field. They also discussed the political developments in the broader region of the Eastern Mediterranean and in Iraq,” the statement notes.

Christodoulides added that the Cypriot President briefed Netanyahu on the state of play of the Cyprus problem and on going UN-led peace talks.

On his part, the Israeli PM briefed Anastasiades on the kidnapping of three Israeli teenagers.

“The leaders agreed on a visit by the Israeli PM to Cyprus the soonest possible. The exact date will be determined through the diplomatic channels,” Christodoulides concluded.