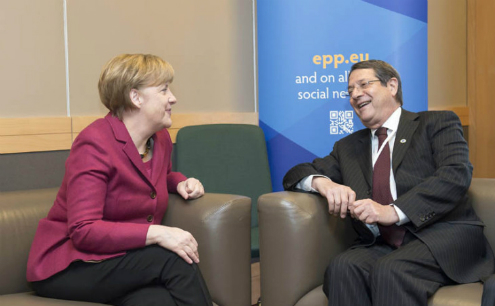 Cyprus president has talks with Merkel, to visit Berlin in May

President Anastasiades will visit Berlin in May where he will have substantial talks with German Chancellor Angela Merkel.

On the sidelines of the European People’s Party congress in Dublin the President and Merkel discussed the Cyprus political and financial issues. Anastasiades expressed his "satisfaction that in the platform for the European Parliament elections of next May, the EPP has included the only reference to a single country, besides Ukraine, a reference about the solution of the Cyprus problem and the basic principles that must prescribe this solution". He said it was "not the first time that the EPP is being supportive, but the continuation of this support, especially at this critical time, adds significantly to all the efforts that we are making in order to achieve a solution at the earliest".

Referring to his meeting with Merkel in Dublin, President Anastasiades said that "the purpose of the meeting was to prepare my visit to Berlin on 6 May. The meeting with Mrs. Merkel took place in a most warm and productive atmosphere", he said, adding that "we discussed many different issues" and that Merkel "was interested in the latest developments on the Cyprus issue, but also about the economic situation of Cyprus and especially the way the problems of unemployment and small and medium businesses are being addressed". He added that "the essential content of this conversation will be transformed into a concrete result during my visit to Germany".