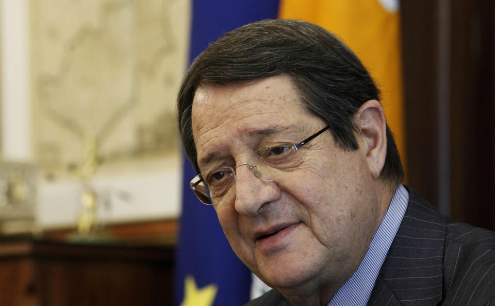 An agreement to end the 40-year division of Cyprus could give Turkey access to ample supplies of gas and reboot its relations with Israel, the president says.

In an exclusive interview with The Associated Press, Nicos Anastasiades said the reunification of ethnically-divided Cyprus could act as a linchpin to regional energy cooperation that could heal the strained relations between Ankara and Tel Aviv. The two former allies fell out dramatically after Israeli commandos stormed a pro-Palestinian ship trying to breach a blockade of the Gaza Strip in May 2010. The raid killed eight Turks and one Turkish-American. "A Cyprus settlement, reached as quickly as possible, will assist not only in Israeli (gas export) planning, but also contribute greatly to restoring relations with Turkey," Anastasiades said.

Cyprus was split into a breakaway Turkish Cypriot north and an internationally recognized Greek Cypriot south in 1974 when Turkey invaded after a coup by supporters of the island's union with Greece. Numerous talks over the decades have failed to resolve one of the world's most intractable problems. Last week, after a hiatus of 20 months and following pressure from the United States, the two sides agreed to talk again. Anastasiades said a deal would help Turkey plug its energy needs by allowing the country access to a steady supply of Cypriot and Israeli natural gas. Cyprus and Israel have both found potentially big gas deposits over the past few years, which they are looking to develop in partnership. Cyprus is also planning to build a liquefied natural gas processing plant which Israel would use to export its gas — a much cheaper alternative to building a pipeline direct to Turkey.

Anastasiades confirmed that Israeli Prime Minister Benjamin Netanyahu may visit Cyprus in the spring to explore avenues for closer cooperation. That would be a landmark visit as it would be only the second time since the creation of Israel in 1948 that an Israeli premier has visited Cyprus. Anastasiades said a deal would eliminate a key political impediment against exporting to Turkey. Ankara currently doesn't recognize the island's sovereignty and disputes its rights to the offshore gas deposits. "This would be very significant for Turkey and at the same time significant for Israel and it could be another way Cyprus contributes to peace in the region," he said. Potential gas riches would be an economic boon for Cyprus which last year agreed to a financial rescue with other eurozone countries and the International Monetary Fund that crushed its banking sector.