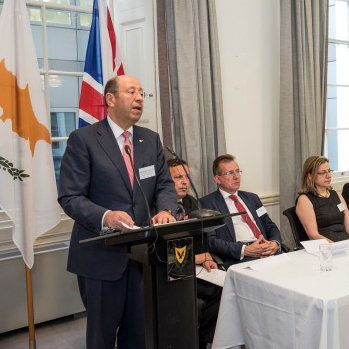 Cyprus promoted as centre for enterprise

The UK Cyprus Enterprise Council joined forces with the International Professionals Association (IPA) to organise a seminar at the Cyprus High Commission in London recently to promote the island’s attractions as a centre for services, enterprise and investment.

UKCEC Chairman Peter Droussiotis and IPA Chairman Simon Denton welcomed a packed and diverseaudience of British and UK Cypriot entrepreneurs, business and professional people, which they noted was a positive sign of the level of interest in Cyprus as a destination for business.

In his opening remarks, Peter Droussiotis, UKCEC Chairman, pointed out that the event was “taking place against a positive backdrop on the island, both in terms of the Cypriot economy, which is gradually re-emerging from the crisis and, of course, encouraging signs that the negotiations currently underway may, at long last, lead to the island’s reunification which has the potential to transform Cyprus’s future prospects.”

High Commissioner Euripides Evriviades set the tone for the evening by outlining that the Cypriot economy had turned a corner: “We can state with confidence and certainty that the economy… is on the road towards full recovery. Cyprus is returning to the international markets, far earlier than anyone predicted.”

He added that, “in a globalised economy where enterprises and investors have high business expectations, Cyprus provides a complete value proposition as a centre for international economic activities by offering numerous advantages such as tax credit incentives, simplified procedures and a well-trained and versatile work force.”

IPA’s Simon Denton said that there were “clear synergies and areas of common interest between our respective organisations which we are keen to develop in the future. The presentations pointed to the strengths and importance of Cyprus as an EU hub for international business, especially for UK persons wishing to expand their UK business to overseas destinations. With a positive double tax treaty enjoyed between both countries, a low, competitive tax system, a diversified but qualified work force and a less bureaucratic regime than other international finance centres, Cyprus should be a shortlisted jurisdiction for a typical international business person or company.”

The event covered a diverse range of themes, with presentations delivered by an authoritative panel, most of whom are UKCEC Goodwill Ambassadors.

‘The advantages of Cyprus as a centre for the protection and exploitation of global IP’ was presented by Nick Kounoupias, Founder and CEO of Kounoupias IP, followed by ‘The benefits and characteristics of the EU Freedom of Establishment Act and why Cyprus should be a shortlisted domicile’ by Andrew Terry, Partner at Withersworldwide.

Concluding the panellists, Dr Patrick Fullick, Founder - Hylle Royce Education talked about ‘Cyprus as an Educational Centre’. There was consensus among the panel and within the audience that Cyprus is open for business and that it presents a variety of opportunities for investment, especially in targeted sectors of the economy such as tourism, energy, renewable energy, shipping, services, education, the arts and real estate. The seminar and reception facilitated information sharing and networking to foster collaboration in aid of this.

UKCEC is a voluntary, independent, apolitical and not-for-profit organisation that relies exclusively on donations and sponsorship to carry out its work of promoting initiatives, which encourage inward investment and bilateral trade with an emphasis on targeted sectors of the economy.

The Council is governed by a board, chaired by Peter Droussiotis. http://www.ukcec.co.uk