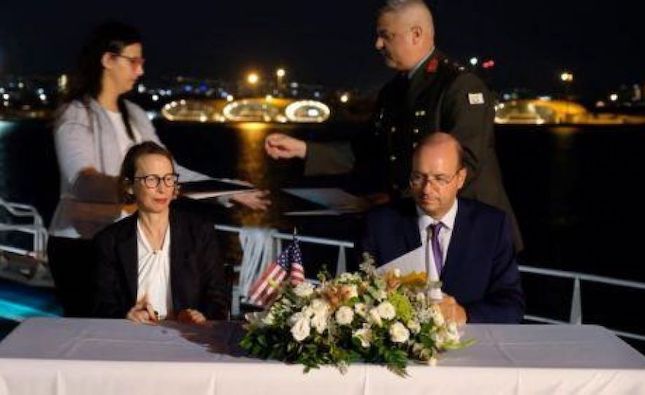 Cyprus to provide logistical support and services to US naval vessels

The celebration took place during an event aboard the US Naval Ship YUMA.

ACSA is a mutually beneficial Agreement that will facilitate US presence in the region and make the process of accessing facilities and receiving logistical support, more effective. It paves the way for the Cyprus Armed Forces to exchange logistics and services, and support the deployment of US forces in the Eastern Mediterranean.

Attending the event were National Guard Officers who received training in military academies in the USA, in 2021 and 2022, through the International Military Education and Training (IMET) Program.

In their remarks, both the Minister of Defence and the US Ambassador underlined the importance of such initiatives that promote the strengthening of cooperation between both countries in the fields of security and defense and expressed their hope that bilateral defense and military cooperation will be further enhanced.

The Cypriot Defence Minister welcomed last Friday’s historic decision with regards to the lifting of the US arms embargo against Cyprus and expressed the gratitude of the Republic of Cyprus to the US Administration for this development.

Petrides underlined, that this important development will contribute to the promotion of peace, stability and security in the Eastern Mediterranean.

“We consider this development as a turning point in our bilateral defense relations, which allows the forging of even closer cooperation between our two countries; that will deepen our security relationship, for the benefit of regional stability and prosperity,” he noted.

In addition, he said, “this historic decision will expand our bilateral trade and commerce, and allow our Armed Forces to increase their operational capabilities while ensuring the key goal of interoperability with allies and partners.”

In his remarks, Petrides said ACSA enables ships such as USNS Yuma to make port calls in Cyprus more frequently, with the knowledge and assurance that the necessary logistical support and services will be provided in a seamless way.

The Cypriot minister also referred to Cyprus’s participation in the International Military Education and Training Program (IMET). He said the opportunity for interaction and cooperation between the armed forces of Cyprus and the United States, forging closer personal ties while also extending the knowledge and experience of our Officers through IMET, is invaluable.

Noting bilateral cooperation is at a historic high, Petrides pledged to continue working to further deepen and enhance our bilateral defense cooperation.