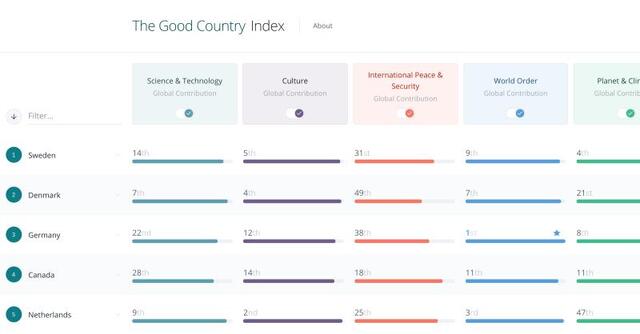 Cyprus is the 12th best country in the world according to a 2020 index published this week.

The Good Country Index measures what each country on earth contributes to the common good of humanity, and what it takes away. The index measures countries’ global impact in seven different categories including science and technology, culture and health and wellbeing, with Cyprus placed 12th overall.

Relative to its size, Cyprus is rated 7th out of 149 countries for its contribution to prosperity and equality, reflected by its FDI outflows and open trading, 10th for world order and 15th for planet and climate.

In terms of its contribution to world order, which takes into account charity giving, number of refugees and UN Treaties it has signed, Cyprus is ranked ahead of Canada (11th), France (12th) and the UK (13th).

George Campanellas, Chief Executive of Invest Cyprus, the national investment promotion agency of Cyprus, said he was delighted by the results.

“The Good Country Index provides a valuable benchmark for how countries collaborate across borders to support each other. Particularly as the world recovers from the coronavirus pandemic, this is more important than ever”.

“Relative to the size of its economy, Cyprus works hard to contribute to the world outside its borders. We are particularly proud that the investment made by the government in recent years to science and technology on the island is reaping its own rewards, attracting recognition in the index for its international publications, Nobel prizes and patents.”

“As countries now look towards attracting direct foreign investment to boost recovery, the findings of the index provide added confidence to investors that Cyprus is a world-class investment destination and can give certainty around all aspects of operating a business.”

The Good Country Index is based on eight years of research, combining 35 separate indicators from the United Nations, the World Bank, the Basel Convention, the Global Footprint Network and numerous other international NGOs and institutions.

For the second time, Sweden is ranked in top position in the Good Country Index, published this month, followed by Denmark, Germany and Canada. The Netherlands, Finland, France, the UK, Spain and Norway also feature in the top ten. Ireland is 16th and the United States of America at 38th. Bottom of the list of 149 countries is Libya.