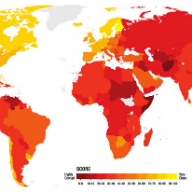 The corruption perception index gave Cyprus 63 points, making it 31st among 177 countries included in the study. The Cyprus evaluation was based on five independent studies, conducted by large private and international organisations and it’s considered an indication of the spread of corruption. For the 2013 results, 13 independent studies from ten organisations were utilised.

In 2012 Cyprus ranked 29th while in 2011, 2010 and 2009 it ranked 30th, 28th and 27th respectively. Denmark, New Zealand, Finland, Sweden, Norway and Singapore are the six countries topping the index chart. Somalia, Sudan, North Korea and Afghanistan are perceived to be the most corrupted countries.

Thirty-one European countries were included in the study and Cyprus ranks 16th among them, while Greece ranks last. But Greece ranks 80th globally, a major leap from the 94th position the country was in 2012. A press release from transparency international cites two major reasons for Cyprus decline, which are: political party interference with the business environment, failure to enact rules and regulations to deal with corruption effectively and the financial crisis that favours the increase in corruption related cases. As a result, the Cyprus branch of transparency international has registered all problems and presented president Nicos Anastasiades with a number of suggestions to deal with corruption related issues.

The United Nations, following a proposition by transparency international, established December 9 as international anti –corruption day. The NGO, in collaboration with local media outlets, is organising a number of events for international anti-corruption day, including television programmes on the effects of corruption and the protection of whistleblowers. “Our goal is to contribute in the strengthening of society and in the improving of the quality of public and private governance in Cyprus. We want to promote transparency, integrity and accountability. One of our priorities is to increase public perception on the effects of corruption and to encourage citizens in participating in the fight against it,” the NGO report said.

Prompted to action by the transparency international report, President Anastasiades met with all responsible bodies to formulate an action plan aiming at ensuring transparency and attracting investors. In that direction, the government decided to sign an international convention that deals in managing information regarding taxation and business information exchange.

Meanwhile Head of the Cyprus certified accountants association, Yiannos Charilaou, told the press that the goal of the meeting was to “make decisions to restart the economy and reclaiming the market confidence Cyprus once had”. He did however express his satisfaction that the government seems to be determined to tackle transparency issues.