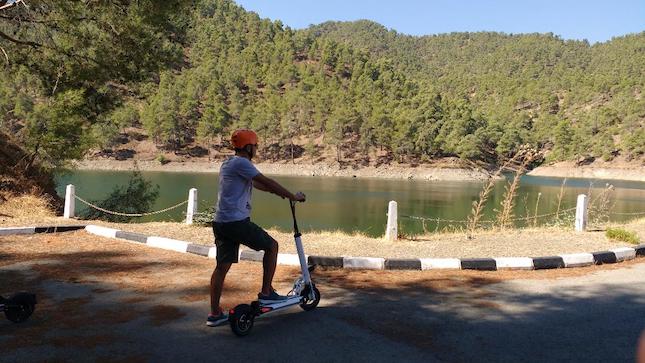 Whizzing through the streets of Cyprus on an electric scooter will soon be regulated by law after the cabinet approved legislation for the use of scooters or e-scooters, including minimum specifications and safety measures.

More electric scooters are spotted whizzing on the roads and pavements as this eco-friendly trend has made it to Cyprus.

However, the ride so far has been unregulated.

No specifications designate what a scooter consists of or where users are allowed to navigate them.

According to the bills prepared by the Transport Ministry, a scooter is a self-propelled device using any form of energy, which can carry a seated or standing person.

The device has handlebars, a drive shaft, and at least two wheels.

Once the legislation is passed by parliament, scooters can be used in bicycle lanes, any other area that constitutes an extension of a bicycle path, or space used by cyclists and pedestrians.

Scooters can be used on pavements or squares provided the local authority has permitted their use in such areas.

Anything that does not conform with the legal definition regarding personal mobility devices, such as hoverboards and skates, will be prohibited in public areas and roads.

The maximum speed allowed for scooters is 15 km per hour.

The ministry warned consumers to be careful regarding their choice of scooters if they want to use them in public areas after the law change.

Scooters sold on the market can reach up to 25 km/h. The minimum equipment for scooters are brakes, rear and front lights, two tyres and a warning bell.

To drive a scooter, one must be at least 16 and wear a crash helmet.

Rental scooters must carry insurance coverage for third parties and be licensed by local authorities.

The legislation will also introduce penalties for violating the above regulations, although the details have not been given.

Transport Minister Yiannis Karousos said: “scooters are being developed around the world initially as a means of recreation while gradually transforming into a means of transportation in the category of micro-mobility”.

He added that developments had overtaken the international community with the result, there is no common European or international response.“As a result, countries are now rushing to regulate the movement of scooters, based on road safety, mobility and local data.”

He said the draft legislation has gone through public consultation, while discussions with stakeholders such as the local government and rental companies have also been carried out.

Several rental companies have encountered the objections of local authorities and the absence of legislation regulating the use of scooters.