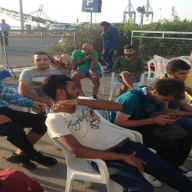 Cypriot authorities early on Sunday rescued around 114 people – 60 men, 19 women, 30 children and five infants – who were in distress in a small boat off Cyprus' south east coast.

The refugees are of Syrian, Lebanese and Palestinian origin, authorities said.

“On September 5th at 23:25 hours, the Joint Rescue and Coordination Centre (JRCC) Larnaca received information from a merchant vessel that a small boat, which was sailing around 40 Nautical Miles south-east of Larnaca, required recovery and rescue by transmitting distress signals,” a press release issued by the JRCC said.

According to the CNA, the boat’s engine had packed in. The refugees had been travelling for three days and two nights. The ship had departed from Syria, stopped at Tripoli in Lebanon,and was on its way to Greece.

JRCC Larnaca immediately planned and coordinated a Mass Rescue Operation (MRO) according to the National SAR plan «NEARCHOS» in order to save the refugees with the participation of air and naval units of the Navy Command and the Cyprus Port and Police. Three ships, two from the National Guard and one from the Port Police with helicopter backup, managed to reach the boat and by 7am the refugees were transported to Larnaca.

At the same time, the ministry of interior, as the responsible authority for the implementation of the National Plan «ΝΑFKRATIS», was informed accordingly and all the relevant departments of the State were also informed to prepare for their reception, including medical care and hospitality in accordance with the new European directives, it added. A meeting of relevant authorities took place at around 2am. Interior Minister Socratis Hasikos was at the port on Sunday morning. He said the refugees had been heading for Greece as a stop-gap to Europe.

The Search and Rescue Operation was concluded at 06:00 local time. The refugees disembarked at Larnaca Port and were given food, water and medical attention. None needed hospitalisation, Hasikos said. They were later to be taken by bus to the camp at Kokkinotrimthia outside Nicosia, which has previously hosted Syrian refugees but was closed down at the beginning of the year.

Hasikos said the government was satisfied that the rescue had gone smoothly and thanked rescue personnel for working through the night.

He said three men were arrested, aged 47, 33 and 28, including the captain. ‘They are not cooperating with police,” said Hasikos. Reports said the refugees had paid €4,000 each to be taken to Europe.