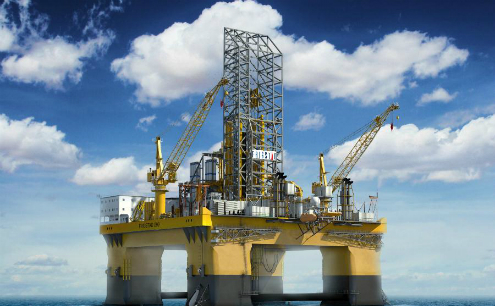 Lakkotrypis said the areas reserved are in offshore blocks 2, 3 and 9. He did not get more specific, although local media identified the areas as one in Block 9 – encompassing a gas field dubbed 'Onasagoras' – and the other overlapping Blocks 2 and 3, incorporating the field known as 'Zenon.'

This appeared to confirm earlier reports naming 'Onasagoras' as the site of the first well to be drilled by the Italian-Korean consortium ENI-KOGAS, which has concessions on offshore blocks 2, 3 and 9.

The consortium is contractually obliged to drill at least four wells.

Lakkotrypis said that ENI’s drilling programme will span 12 to 18 months, depending on the finds, with each drill lasting about 80 days, at a depth of between 5,000 to 5,500 meters.

The Mail understands the NAVTEX covers two areas for exploration, it is effective for three months and expires on December 3, at which point it will likely be renewed. Given that each drill will run for approximately 80 days, as the minister noted, the NAVTEX is intended to cover drilling operations at more than one sites during this time.

Lakkotrypis said the fact the drilling rig will be staying offshore Cyprus for a continuous period of 12 to 18 months gives the gas companies greater flexibility in their drilling programme.

The drilling platform is currently en route to Cyprus from Mozambique. The rig is owned by Saipem, an Italian oil services group and a subsidiary of ENI.

Lakkotrypis declined comment on expectations of gas finds in the wells earmarked by ENI. But reports have suggested seismic survey results are encouraging.

During this second drilling cycle – after Noble Energy’s operations in Block 12 – Cyprus hopes to discover significant quantities of recoverable gas, which would put back on track plans for a land-based facility to liquefy the gas for exports.

Lakkotrypis said also he would be traveling to Amman on Monday for separate meetings with his Jordanian counterparts, the ministers of tourism, commerce and energy.

Without going into detail, he hinted that Jordan may be interested in Cypriot gas in the long term, noting that he discussed this with his Jordanian counterpart during a conference in Malta in July.

“The Jordanian minister extended an invitation to initiate this kind of discussion, as both Jordan and Egypt are planning construction of de-liquefaction terminals but also natural gas pipelines.

“Therefore all prospects will be discussed during these one-on-one meetings,” said Lakkotrypis, who last month was in Cairo discussing potential energy cooperation with Egypt.

The minister downplayed the notion that Cypriot plans to export gas have been derailed following a preliminary agreement signed this week between neighbours Israel and Jordan.

A group of Israeli energy companies said on Wednesday they signed a letter of intent to sell natural gas to a Jordanian power company, in a potentially multibillion-dollar deal.

The Israeli companies said they would supply 45 billion cubic meters of gas over 15 years from the offshore Leviathan field to Jordan’s state-owned National Electric Power Co.

The Israel-Jordan deal does not adversely impact Cyprus’ plans, Lakkotrypis insisted, since it was already known that the first development stage of Israel’s Leviathan gas field involved regional gas sales.