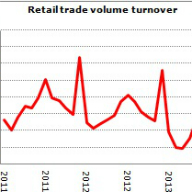 The retail Trade Turnover Value Index was up by 4.0 units or 5.4% in March this year compared to March 2013, according to data released recently by the Cyprus Statistical Service.

For January-April, the Index is provisionally estimated to be up by 0.2% compared to the corresponding period of 2013.

As regards the Turnover value Index of Wholesale and retail trade and repair of motor vehicles and motorcycles, the data show that inthe first quarter of 2014 the index was down by 0.8 units or 1.4% to 57.6 units compared to 58.4 units in the last quarter of 2013.

For the period January-March, the Index fell by 5.4% compared to the corresponding period of 2013.