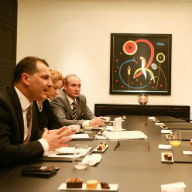 The minister was speaking on CyBC radio from Moscow where he is accompanying President Nicos Anastasiades.

During his visit, Lakkotrypis met representatives of Transaero airline, the biggest carrier to Cyprus from Russia, and also with the largest Russian tour operator.

Fears have been growing over an expected fall in Russian tourism this year due to the economic situation in Russia and the exchange rate with the rouble.

Cypriot tourism authorities believe if the drop in Russian arrivals could be limited to 25% it would be manageable and could be made up from other markets.

Lakkotrypis said the message he received from his meetings in Moscow was one of cautious optimism as the situation in Russia was still quite fluid, he said. Many Russians were waiting for the situation to stabilise before booking, he said, adding that he would have a clearer picture in a month’s time.

“Encouragingly, however, both partners (the airline and the tour operator) are committed to Cyprus and will do everything possible to reduce or eliminate, if possible, any losses likely to incur in the Russian market,” Lakkotrypis said.

“The aim is to stabilise the situation. The unfortunate thing is that the situation has not yet stabilised, forcing the Russians travellers to leave their reservations until the last minute. So while in other years we had indications earlier on, this year we have to wait a while.”

He said this time last year, Russians were booking holiday to Cyprus at the rate of around 1,100 a day but this year, the number had fallen to around 900 a day. He said more information would be available during the Moscow tourism fair next month.

He did however say that there was some pressure from the Russian tourism industry to drop prices in Cyprus to compensate as much as possible for the weakness in the rouble.

“Something that also emerged from the discussions was that we looked to see if we could open some new markets, such as China,” said Lakkotrypis, adding that by May 2015, there would be an outline about what Cyprus and Russia could do together to kick start such a move.

Flights could be from Cyprus to Beijing through Moscow, which he said was a good hub for Asian travellers.

“We had a preliminary discussion. I will not say that we have arrived somewhere, but we have set dates. We said that by May we will have an outline of what we could do,” the minister added.

He said the Russian companies he spoke to were already operating in Asia and that it appears a growing Chinese middle class was travelling more, andwere also interested in wedding tourism, something for which Cyprus is a popular destination.

Commenting on the demise of Cyprus Airways last month, Lakkotrypis said the airline’s schedule was almost fully covered by other companies.

“Certainly the absence of Cyprus Airways reduces competition between airlines and this is something we monitor very closely, but I cannot say that we are currently losing any airline seats, either in terms of Britain or Germany, which have increased, or even Russia,” he added.

In fact, the minister said, the indications are that the UK and German markets would be better this year both because Cyprus has signed agreements with some of the largest UK tour operators, and increased flights to Germany, but also because of the exchange between the euro and the British pound sterling.