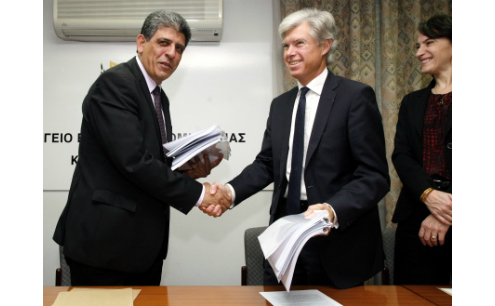 After intensive negotiations, which began on 13 November 2012, the Council of Ministers have approved a contract with Total granting licences for hydrocarbons explorations in blocks 10 and 11 within Cyprus’ EEZ.

The negotiations between Cyprus and the French company were concluded following twelve rounds of multi-day meetings, with improvements achieved on the initial technical and financial proposals of Total. Minister of Commerce Neoclis Sylikiotis said the deal concludes one of the most critical targets set by the government in its energy policy.

The successful contract with Total follows the deal concluded last month with a consortium of Italy’s Eni and South Korea's KoreaGas Corp (ENI/KOGAS) for blocks 2, 3 and 9 – bringing the total number of blocks to have been granted licenses for hydrocarbon exploration within Cyprus’ EEZ to five.

Reports said Cyprus would receive €24 million in signature bonuses as part of the deal and the revenue from signing two licenses with Total is estimated to bring around €100 million to state coffers, while the €150 million earned from last month’s ENI/KOGAS venture for three more blocks have added additional funds to state revenues.

Minister Sylikiotis said around ten exploratory drills were expected to take place within the island’s EEZ in the next three years while infrastructure projects should also get underway and said: “All these mean growth and thousands of jobs in the energy and other sectors.” He also referred to the financial and political benefits from the exploitation of hydrocarbons and cooperation with countries such as the US, France, Italy, Israel and South Korea, and the prospect of becoming a regional energy hub.

President of Total’s Middle East exploration and production Arnaud Breuillac was positive about the company’s prospects, commenting: “We can say that it is the first day of Total’s presence in Cyprus and we look forward to a bright future.”

Breuillac said his company will carry out 2D surveys in block 10 and 3D surveys in block 11 and might also proceed with drilling for oil and gas as the possibility for the presence of oil has been examined. The French executive said the Total group has the relevant expertise in deep-water exploration and the development of large off-shore projects to fully explore and develop the potential oil and gas reserves. Breuillac said the deal for the two blocks fits in well with Total’s new exploration strategy in uncharted territories.

Asked about the second licensing round, Commerce Minister Sylikiotis said the government has extended the deadline for another 180 days. Cyprus has bids for five more of its 13 blocks.