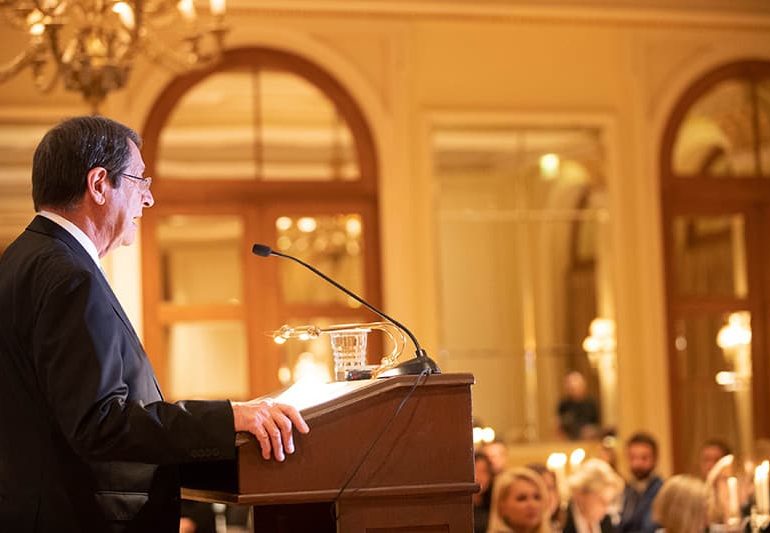 Cyprus shipping a high priority for the government

President Anastasiades expressed his government’s strong commitment to reinforcing the Cypriot maritime cluster and supporting the shipowners with vessels under the Cyprus flag.

During his speech at the Dinner of the Cyprus Union of Shipowners, held in Athens, on Tuesday, President Anastasiades underlined the leading role that Cypriot shipping has played in the economic recovery of Cyprus, boosting decisively the economic growth in the country.

The innovative planning and further development of this important sector, represent high priorities for the Cypriot government, said President Anastasiades. He also referred to the importance of the newly established Deputy Ministry of Shipping of the Republic of Cyprus as an institution capable to enhance the shipping administration of Cyprus and to ensure a well-structured strategic planning in the Cypriot maritime cluster.

Furthermore, President Anastasiades highlighted the importance of a competitive tax regime for shipping, which was enhanced in Cyprus despite the economic crisis, through tax advantages and other provisions, which facilitate the shipping activities. ‘These provisions have contributed to the ranking of Cyprus as the 11th largest merchant fleet worldwide and the 3rd largest in the EU. At the same time, Cyprus has one of the biggest centers for ship management’, he said.

Anastasiades also stressed the new challenges and opportunities emerging from the discovery of important hydrocarbon deposits in Cyprus’ EEZ and in the broader region. This development represents for the Cypriot maritime industry a chance to develop new initiatives through collaborations, which will have the Cypriot government’s full support, concluded President Anastasiades.