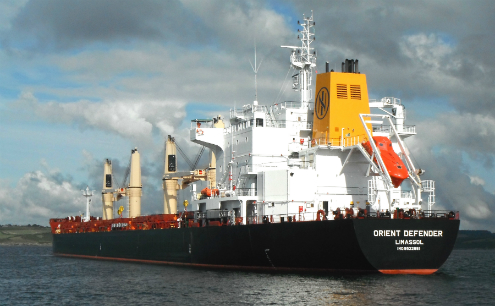 As one of the only truly globalised industries in Cyprus, shipping continues to substantially support Cyprus' economy. Director General of the Cyprus Shipping Chamber Thomas Kazakos shares his thoughts with CyprusProfile on the past, present and future of the Cyprus shipping industry.

What are the key benefits for shipping companies to operate in or through Cyprus?

Cyprus is the only EU-approved open registry, which means you do not have to be a Cypriot national to register a ship and enjoy the variety of benefits of our flag. Around 80% of the Cyprus flag belongs to Northern European shipping beneficial interests, you could describe the Cyprus shipping industry as a mini-EU. Cyprus has one of the most competitive tax frameworks for shipping in Europe – if not the world. However, it must be made absolutely clear that we are not talking about a zero-tax or a tax haven regime, but a fully transparent and legally vetted system of tax planning for a very specific industry. For decades, Cyprus has worked hard to raise the standards of inspection, application and the operation of shipping and we can proudly say we offer one of the widest scopes of coverage for shipping activities in Europe today.

How big is the Cyprus register and how important is the shipping sector to the Cyprus economy?

The Cyprus Shipping Chamber (CSC) represents 150 member companies, which collectively control a fleet of close to 2,500 ocean-going ships and around 50 million gross tonnes. However, not all these vessels are under the Cyprus flag.  As a registry, the Cyprus flag is the 10th largest in the world and the 3rd largest in the EU, controlling over 1,000 vessels and over 20 million gross tonnes.

Cyprus is the largest third party ship management centre in Europe and the largest crew management centre in the world. Our member companies employ around 4,500 land-based personnel – more than half of which are Cypriots – and over 55,000 seafarers worldwide. Personnel in Cyprus are highly educated and shipping continues to be one of the highest paid industries in the country, providing a great opportunity to retain a highly trained workforce in a country facing serious economic challenges and rising unemployment, especially among the highly educated workforce of Cyprus.

A significant factor is that without any state investment, other than administrative supervision by the Department of Merchant Shipping (DMS), the shipping industry contributed almost 8% to the GDP of Cyprus in 2012 – despite the difficult economic climate. Although we are a strong and established shipping nation, there is still enormous growth potential for the Cyprus flag.

What is the role of the Cyprus Shipping Chamber (CSC)?

As an industry-based association, how do you serve your members?

We have three key services: the promotion and protection of the legitimate interests of our members both in Cyprus and abroad, the provision of reliable information through our global involvement in tackling policy and industry issues and the creation of social unity by active dialogue with our members.
The trust and cooperation we have built with both member companies and decision makers is priceless. We are professional lobbyists for shipping both locally and internationally. We are actively involved in Brussels, Geneva and London, while in Cyprus our primary target is the maritime administration – the DMS – as well as the parliament and private sector decision making bodies.

Shipping is a highly professional industry with solid technical know-how, which we freely pass on to various government and state bodies that we cooperate with. The Chamber aims to be part of the entire process from drafting to implementing shipping related policies and presenting decision makers with solutions to benefit both our industry and our national economy.

It is crucial to be actively involved in groups that make decisions about your industry and as Director General of the Chamber my job is to be a ‘glorified messenger’ – to grasp and understand what the shipping industry wants, take it forward and make it happen.

How has the shipping industry in Cyprus developed over the last decades?

International shipping has also been affected by the severe post-Lehman Brothers crisis and we saw a huge drop in freight rates in certain segments. Our membership is a reflection of the wider industry, and what gives me great confidence is that we have not lost any shipping company since 2008 – on the contrary we have gained new members. Some companies have had to undergo varying degrees of restructuring over the years, but they are still here and for good reason.

When I began my career at the Chamber 21 years ago, our biggest concern was the image of the Cyprus flag. Back then Cyprus was not considered a top quality flag, the detention rates of Cyprus flag ships were relatively high and we were included in the Paris Port State Control MOU black list. Cyprus was at the peak of its boom years, but the growth rate of the maritime administration’s manpower capacity was not keeping up to secure standards. Another aspect to remember is that around 80-90% of the Cypriot merchant fleet rarely calls at a Cypriot port as they trade worldwide.

We worked hard to identify the most serious issues. We computerised the DMS, increased practical inspections by appointing additional inspectors and maritime officers worldwide and adapted a private independent surveyors’ network system in major ports outside Cyprus to get a firm grip on all vessels under the Cyprus flag. We ensured regular inspections and soon saw a sheer drop in the number of detentions, accidents and more importantly in the mentality after adopting azero tolerance stance to substandard ships. It was unfair to CSC members operating at the highest standard, to allow one unscrupulous operator to tarnish the image of our flag and the entire Cyprus shipping industry. We achieved our goal and today the Cyprus flag is considered one of the highest quality EU flags available. We are now at the top of various Port State Control Agreements ‘white lists’ and have every intention of staying there.

In the past decade we have ensured that shipping, which is a globalised industry by nature, operates within an approved and transparent tax and legal framework. The current shipping tax framework of Cyprus was worked on for over 10 years in cooperation with the EU and was approved under the current composition of the EU Commission. This resulted in the fully upgraded and approved Cyprus tonnage tax system in March 2010. Today we have a solid shipping sector offering one of the widest scopes of coverage for shipping activities in Europe, through three clear-cut separate inclusions of ship owning, shipmanagement and chartering.

What key challenges is the shipping industry facing today and has the current economic crisis affected the industry?

Shipping is still going through a rough time, we had almost six extremely profitable years and now we are going through five hard freight market years. Cyprus has been severely hit by the economic crisis, but thanks to over 20 years of hard work we have laid strong foundations to weather this storm. Yes, we have had some collateral damage, but who hasn’t been affected by these events?  Our Achilles heel remains the Turkish ban on Cypriot flagged vessels. It has not affected the whole industry, as not all our ships go to Turkey, but it is a small yet painful block in our otherwise efficient system. This is a purely political issue and the Chamber is non-political.  Regrettably this illegal trade restriction, unilaterally imposed by Turkey, in effect is a ‘lose-lose-lose’ situation for Cyprus, Turkey and the EU. If this ban was lifted it would instantly provide advantages for all parties involved – as well as EU consumers.

What opportunities do you see for growth and development? What possibilities has the recent natural gas find opened up for shipping?

We are seeing improvement in some segments of our industry, but the fastest growing is definitely the energy field. The recent natural gas discovery in Cyprus Exclusive Economic Zone has been an exciting development. With the decision to build a liquefied natural gas (LNG) terminal in Cyprus and to transport LNG by ships, our industry will be heavily involved in the developing oil and gas industry. The discovery of substantial hydrocarbon reserves coupled with the strong operational framework Cyprus already has in place, the shipping industry has one of the most positive expectations for further growth.

How do you see the shipping industry developing over the next five years?

When talking about the overall international business activities in Cyprus, a big part of it started with the shipping industry. With new prospects also in energy thanks to the hydrocarbons discovery, shipping will continue to shape Cyprus as a business hub. With the introduction of a series of carefully planned measures to overhaul public spending and reinforce the main economic sectors, the outlook for the next five years is well-positioned for Cyprus to return to prosperity. Strategic partnerships can create innovative shipping and energy projects with huge financial benefits for the Cyprus economy.

We already have a solid group of high-calibre ship owners – both Cypriot and foreign – who reside and operate in the country and two of the top five ship management companies in the world have their headquarters in Cyprus. Their presence is continuous confirmation that we are on the right track.
Having the right image is great, but real substance is crucial and we need to keep evolving. We need to intensify our efforts to lift the Turkish ban on Cypriot vessels, as all parties can only gain from solving this issue. We also need to further expand and promote our tonnage tax system to attract more business to Cyprus in terms of the quality and number of ships.

Another key aim is to develop a more modern and upgraded maritime administration through the creation and swift appointment of a new position for a Shipping Under-Secretary, who will exclusively deal with both national and international shipping matters in cooperation with the DMS and the industry. We need to send a strong message that despite the current economic climate, Cyprus is an important part of the global shipping community and offers good reputation, a supportive tax system and an efficient maritime administration dedicated to implementing and promoting shipping policies.
Shipping is probably the only truly globalised industry Cyprus has and we need to protect it. Our member companies operate on an international level and we need to ensure the government is able to respond to issues efficiently. We are committed to looking for new ways to raise the standard, because in these uncertain economic times competition is fierce.

Based on the Troika’s latest assessment, as part of the on-going discussions for the provision of financial assistance to Cyprus, shipping has kept its operational and taxation system intact.  As such, and with the urgent need for the government to introduce these proposed measures, Cyprus shipping has solid and promising prospects for further development and attraction of more high quality ships and shipping companies, thus continuing to substantially support the Cyprus economy.