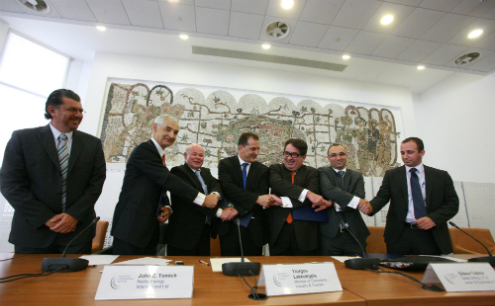 A Memorandum of Understanding (MoU) for the Cyprus LNG terminal was signed in Nicosia on Wednesday between the Republic of Cyprus and Noble Energy, Delek Drilling and Avner Oil Exploration.

Energy Minister George Lakkortypis, representing the Cyprus government, said during the ceremony that the LNG terminal in Vasilliko, in the southeastern shores of Cyprus, is “an ambitious project of strategic importance” and will comprise “the largest investment in the history of the Republic of Cyprus”.

He added that the signing of the Memorandum represents the next milestone in the roadmap for the exploitation of indigenous gas reserves. The agreement defines the framework, in which the negotiations between the government and the three companies will be conducted, in view of a comprehensive agreement regarding the project’s construction and operation. “The completion of this project is an important step towards the realization of our energy strategy, with the ultimate objective being the establishment of Cyprus as a regional energy hub” Lakkotrypis said.

He noted that Cyprus is actively seeking the cooperation of neighboring countries, while its strategic location and EU membership can constitute a stable and reliable bridge of cooperation between the countries of the Eastern Mediterranean with Europe, Asia and the Middle East. Responding to questions, the Minister said that the technical details concerning the LNG terminal will be the subject of negotiations to follow in the next six months. Shareholding percentages will also be determined throughout the negotiations, he added.

The Memorandum is the first step towards a more detailed project agreement. The final investment proposal will be taken in 2015, the Energy Minister said. The financing of the project can be done in various ways, Lakkotrypis noted moreover, adding that there are some ideas that are being discussed. The Minister was also asked about the progress of the appraisal well, in Cyprus’ EEZ block 12, saying that all is going well and according to schedule.

Cyprus Country Manager John Tomich said on behalf of Noble that the agreement constitutes an important milestone for the cooperation of the Republic of Cyprus with its partners, adding that it will lead to the full development of natural gas reserves to be found in block 12. Speaking on behalf of Delek Drilling and Avner Oil Exploration, Gideon Tadmor said the MoU demonstrates the government’s and the three companies’ commitment to go ahead with the construction of the LNG plant.

Only a few years ago, the signing of this agreement seemed like a “fantasy” or a “dream”, while today we are following the path towards realizing this dream, Tadmor said. He also noted that Cyprus is recovering quickly from the financial crisis and that the project, which will attract funds and create thousands of jobs, will potentially transform not only the country’s economy, but change the wider region, serving as a bridge between nations and peoples. Asked if the Cyprus LNG plant can be the best alternative for Israel’s exports, Tadmore noted that “this is a possibility and opportunity that weintend to investigate” and promote.

The LNG plant is intended to be capable of being expanded, to accommodate additional natural gas discovered in the Cyprus EEZ, either from block 12 or other blocks which have been licensed to date (blocks 2, 3, 9, 10 and 11) or may be licensed in the future, as well as natural gas from neighboring countries.

This MoU is the first in a series of agreements that will be required for the implementation of the Cyprus LNG Project. A target date of December 31, 2013, has been agreed between Cyprus and the three companies for completion and signing of the Cyprus LNG Project Agreement. On this basis, it is planned that the first LNG cargo would be delivered from the Vasilikos Plant to international markets in late 2019 – early 2020. US and Israeli Ambassadors in Nicosia John Koening and Michael Harari were also present at the event.