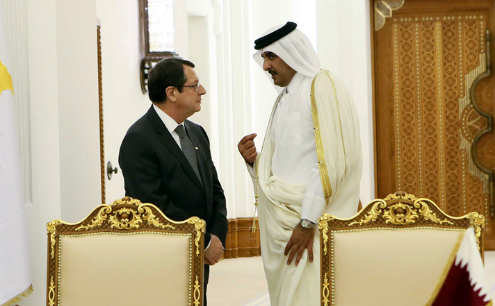 One agreement and three Memoranda of Understanding (MoU) were signed during the President's recent visit to Qatar, reported by the government as successful in terms of future investments.

Government spokesperson Christos Stylianides said: “We will not assign more expectations than reality allows, but it seems that there is an interest. This interest is demonstrated by the fact that the Emir of Qatar has already given instructions to the investment authority and to other technocrats and experts of the Emirate to send a delegation to Cyprus in the coming weeks to examine the possibility for investments,” said Stylianides. He said the most important meetings had been with the Emir of Qatar, Sheikh Tamim bin Hamad Al Thani, the Qatari investment authority, and the Islamic Bank.

The Cypriot delegation laid out the island’s advantages as an investment destination for tourism issues, health services, and fish farming as well as in other sectors, the spokesman said. “Beyond any illusions, there is an interest, but the evaluation of investments takes place in practice,” said Stylianides. He said the impression given was that Cyprus is viewed in Qatar as a credible investment destination. There had also been some interest in theprivatisation of Cypriot semi-state bodies, which must be sold off as part of the island’s bailout deal, the spokesman said. Whether anything concrete comes from the contacts remains to be seen.

In 2012 under the previous administration, a huge multi-million deal with Qatar to develop land opposite the Hilton Hotel in Nicosia into a luxury complex fell through after disagreement over the price of the plot. More recently talks on a deal for a Heathrow timeslot being sold by Cyprus Airways for €20 million were ended by Qatar Airways because details of the negotiations were leaked to the Cypriot press. During the President’s private meeting with the Emir – where Anastasiades was met by an honour guard – Foreign Minister Ioannis Kasoulides signed an MoU on cooperation in the field of education and an agreement on cooperation in the legal field. Energy Minister Giorgos Lakkotrypis signed an MoU on cooperation in the energy sector, and Agriculture Minister Nicos Kouyialis signed one on cooperation in the field of desalination and waste water treatment and reuse.