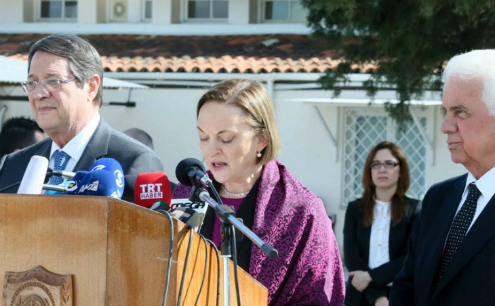 Cyprus Solution could expand economy by €20 billion in two decades

A solution to the Cyprus problem could raise per capita incomes by €12,000 over 20 years, expanding the size of the economy by around €20 billion.

New research on a study published by PRIO Cyprus Centre has raised initial calculations of a Cyprus peace dividend, estimating that a solution could raise per capita incomes by approximately €12,000 over 20 years and expanding the size of the economy by around €20 billion.

The initial study on the ‘Cyprus peace dividend’, funded by Sweden, Denmark, Finland and Norway, was presented last March with economists Fiona Mullen, Alexander Apostolides and Mustafa Besim estimating GDP could  rise by an extra €18 billion two decades after reunification. However, new research on the study published this week showed that the peace dividend could be even greater when analysing the benefits a solution could bring to each sector of the economy, such as tourism, construction, wholesale and retail trade, transport, financial and professional services, and higher education.

The report works on the basic assumption that a settlement comes into force in 2016 and that a united Cyprus will be based on a bicommunal, bizonal federation with political equality – as outlined in the joint declaration of February 11, 2014.

The average peace dividend every year would be just over €2bn on average in the first five years after a solution, just under €5bn in the first ten years and just over €10bn the first 20 years, according to the study. GDP per capita would rise from around €15,500 in 2016 to around €28,500 in 2035, compared with approximately €16,500 without a solution. Thus, annual incomes, at constant 2012 prices, would be around €12,000 higher by Year 20 with a solution than without one, said the researchers. The annualaverage growth rate would be 4.5% over 20 years, compared with just 1.6% without a solution, with the peak growth rates coming in the first ten years. The lift to real GDP growth rates would therefore be around 2.8 percentage points on average each year.

The study also looked at solution-specific investment like natural gas (potential pipeline to Turkey in addition to an LNG plant), housing and Famagusta’s reconstruction. “A pipeline to Turkey would generate €1.3bn in additional gross investment. More importantly, it would yield much earlier government gas revenues than would be the case without a solution,” said the study.

Speaking at the report launch, UN Special Representative Lisa Buttenheim welcomed the contribution of the report to the public debate on the peace talks and commended the two leaders’ decision to speed up the process by meeting twice a month. “As the negotiations intensify, Cypriots will naturally have many questions about the impact of a settlement on their own lives and on their pockets,” said Buttenheim.

The research undertaken attempts to address these questions by putting a number on the benefits to the economy as a whole and to individuals, she said. The acting special adviser hailed the potential total peace dividend of some €20 billion over 20 years as “a great prospect” and encouraged people to challenge the models and figures used by the researchers in the study and engage in an inclusive debate.

“In engaging you take a step, for just a moment, into a future united Cyprus. You dare to imagine what the future can look like together and start to focus on the opportunities, not only those that come from a settlement itself, but also the permanent gains that may arise – as the authors of the report say, from opening up a Turkish market of 74 million people to Greek Cypriots and a European Union market of 500 million people to Turkish Cypriots. Imagine that,” said Buttenheim who added that the launch was the result of “a renewed vibrancy of civil society, which has a crucial role to play in building public confidence in a better future”.

The study followed a two-pronged approach, looking at total factor productivity (TFP) or the capacity for long-term growth with and without a solution, and then potential growth on a sector-by-sector basis, and looking at the average of the two combined. “In the past, the tendency has been to see the costs and benefits of a solution in a static way: there was an appreciation of the immediate costs, but there was little understanding of the dynamic benefits,” said the research team.