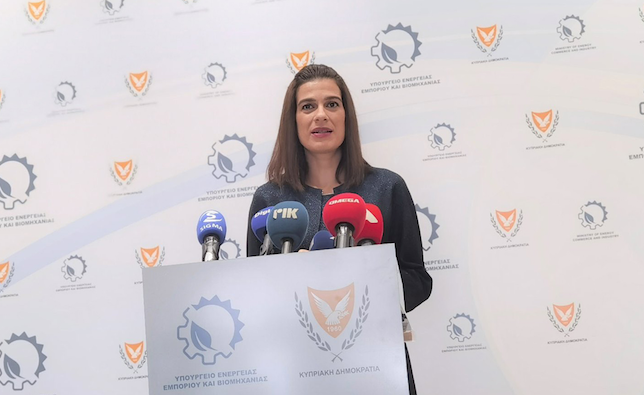 Cyprus to step up role as EU energy hub

Cyprus will be looking to upgrade its role as an alternative energy hub and supplier to the EU, making the most of its untapped natural gas reserves and upcoming electricity interconnectors with Israel, Egypt and Greece.

Energy Minister Natasa Pilides said in an interview that the island’s energy projects have regained lost ground in the aftermath of the war in Ukraine and sanctions imposed on invading Russia, a major energy supplier to Europe.

She told the Cyprus News Agency that the government is pushing partners involved in the natural gas projects to step up exploration and extraction efforts to get the island’s offshore reserves out of the Mediterranean’s basin and on to the market.

“We expect the Chevron consortium to come up with specific suggestions for exploiting the ‘Aphrodite’ reserve. We hope that the right synergies have been found in relation to either Israel or Egypt in order to achieve a more optimistic timetable, given the opportunities that have presented.”

She added that authorities expect to see developments with “Aphrodite” some time towards the end of the month or early April.

“Cyprus has entered a dialogue with its EU partner on how it can contribute to the bloc’s energy supply and security,” said Pilides.

The minister did, however, note that for the moment available quantities are limited, pending more exploration drilling activities.

She said that by the end of March, the ExxonMobil – Qatar Energy consortium will have completed the confirmation drilling in block 10 and the results are eagerly awaited as Cyprus is hoping to see its confirmed reserves increase significantly.

At the same time, as Pilides noted, the Eni-Total consortium will proceed with exploration drilling within the year. Seismic studies will begin in block 5 by ExxonMobil to confirm whether the block is connected to reserves in block 10 and if there are prospects in that area.

Asked whether she was concerned over the recent rapprochement between Turkey and Israel and whether she thought it would deprive Cyprus of some opportunities in the energy sector, the minister said that Cyprus’ co-operation with Israel in the energy field remains excellent.

The minister added that authorities are very optimistic over the developments with the EuroAsia Interconnector as the project will enable Cyprus to import and export energy from various sources.

The EuroAsia Interconnector, the subsea electricity cable linking Cyprus and Israel with continental Europe, via Greece, has recently secured a record €657 million in EU financing geared at clean energy sources, like solar and wind.

Last year, it also secured €100 million in grants from the Recovery and Resilience Fund, thus securing about half the funding for the Cyprus-Crete sector.

Pilides highlighted the importance that the EU attaches to the electricity interconnection project  between Cyprus and mainland Europe, as it will end the island’s energy isolation and supply the bloc with an alternative, yet reliable energy source.

She stated that the implementation of the EuroAsia Interconnector is progressing rapidly. In Cyprus, licensing procedures have moved very fast and have already been secured.

“The goal is the connection with the European market at a first stage, while at a second stage the Cyprus-Israel interconnection will be set up.”

As she noted, “another project, the EuroAfrica Interconnector will then be connecting Egypt with Cyprus,” said the Energy Minister.

“This means that we will have much greater energy security, while we will able to import and export energy, giving impetus to more RES investments and new technologies, such as offshore windfarms and photovoltaics. With these new technologies we can increase our own energy supply, as well as export energy,” she said.