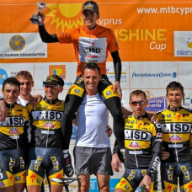 Cyprus is a destination where central Europeans choose to prepare for other races early in the season, due to its agreeable climate and trails giving many a break from ‘winter’, says the website.

The Cyprus Sunshine Cup, the island’s season-opening cycling event, has been upgraded and will consist of two rounds this year, organisers said. “We wanted to improve and give the Cyprus Sunshine Cup a new pulse,” said promoter Mike Hadjioannou. According to Cycling News, the new approach targets amateur riders, especially those who want to take part in the Cape Epic in South Africa a few weeks later.

“Cyprus is a destination where some central Europeans chose to prepare for other races early in the season. Its agreeable climate and trails give many a break from ‘winter’,” the website said. Not only are the trails technically challenging and physically demanding, but the trails in the Afxentia stage race also offer stunning views. The first stage will be a time trial event. However, compared to all previous editions, the race will not take place in the Macheras mountains but in Lefkara. The new second stage will start from there, too, while its finish will be in Skarinou. Lythrodontas will be the start-finish for stage 3, and the riders will ride the well known large loop through the Macheras mountains. On stage 4, the cross country race at Mantra tou Kampiou concludes the competition.

“The Afxentia stage race is an ideal preparation for the Cape Epic, and you can use it as part of a training camp,” said Hadjioannou. Non-Cape Epic racing pros may also use the racing in Cyprus as a training ground ahead of the World Cup. The second stop of the Cyprus Sunshine Cup will then take place one week later in Oroklini as a cross country race.

The 2014 Cyprus Sunshine Cup Programme will take place on February 27-March 2 at the Afxentia stage race, Lefkara / Macheras Mountains and on March 9 at the Oroklini cross country, Oroklini.