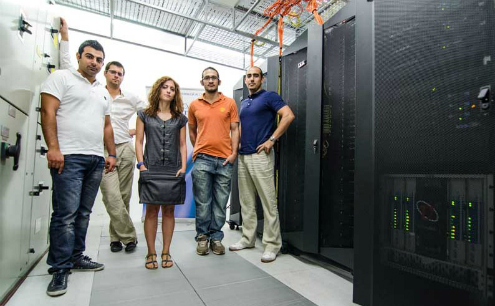 In its first year of operation, Cyprus’ very own supercomputer has carried out simulations producing 70 TB (Terabytes) of data, the equivalent of 17 million of copies of the bible, which would have taken a normal laptop 456 years to compute.

The Cyprus Institute established the first Cypriot national supercomputing centre last year, installing and running the most powerful computer open to academia in the Eastern Mediterranean region. The supercomputer Cy-Tera was made available to all scientists in Cyprus from May 2012 to run their scientific applications on a range of issues from regional climate change to nanotechnology and drugs for asthmatics.

According to a released statement by The Cyprus Institute yesterday, the supercomputer infrastructure is something that “Cyprus should be proudof”. Cy-Tera is a hybrid machine introducing novel computational elements so far unknown to Cyprus. Its computational power is 30 Tflops, which means it can perform 30 trillion multiplications per second. According to The Cyprus Institute, “Cy-Tera provides Cyprus with a leadership infrastructure enabling our country to establish itself as an educational leader in computational science and a research bridge between the Eastern Mediterranean region and the EU”.

For a year now, the computational power of Cy-Tera has been used as a research tool for scientific discoveries by more than 100 scientists. To put this into perspective, it would have taken a standard laptop 456 years to carry out the same amount of computation as Cy-Tera has completed during its first year of operation. The scientific simulations that were performed on Cy-Tera produced data in the order of 70TB – equivalent to the content of 17 million copies of the bible.

Research scientists from the University of Cyprus used Cy-Tera to carry out Molecular Dynamics simulations for drug design purposes. The studies of certain proteins, which defend against conditions such as asthma, stroke and heart attack, will contribute to the future design of more effective pharmaceuticals, said the press release. “The above achievements would not have been possible had it not been for the close collaboration and sharing of expertise between The Cyprus Institute and world leading computational centres such as the National Center for Supercomputing Applications (NCSA) at the University of Illinois in the USA (http://www.ncsa.illinois.edu) and the Juelich Supercomputing Centre in Germany (http://www.fz-juelich.de/ias/jsc). These partners were instrumental in establishing such an advanced and sustainable computational infrastructure in Cyprus,” said the statement.

Cy-Tera was funded by the European Regional Development Fund and the Republic of Cyprus through the Research Promotion Foundation. The Cyprus Institute also secured additional funding from the EU for user support and training activities.