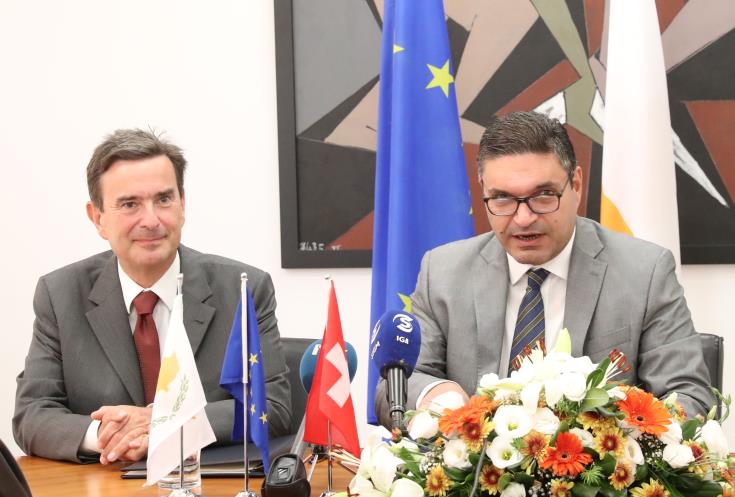 Cyprus and Switzerland on Monday signed a protocol amending the Treaty for the avoidance of double taxation in a move both sides said will boost their trade ties while attracting investment.

The protocol signed by Finance Minister Constantinos Petrides and Swiss Ambassador Pierre-Yves Fux introduces the minimum standards of the OECD’s Base Erosion and Profit Shifting (BEPs) as well as provisions concerning benefit entitlement.

The Avoidance of Double Taxation agreement covers taxes on income and on capital related to bilateral agreements.

Upgrading and expanding the network of Double Taxation Conventions is of high economic and political importance as Nicosia aims to further strengthen and attract investments by promoting Cyprus as an international business centre.

Petrides said, “the signing of this protocol emphasises the very good relations in the economic and political sphere between the two jurisdictions”.

He looked forward to further advancing and strengthening a mutually beneficial relationship between Cyprus and Switzerland.

“The Republic of Cyprus is confident that an environment that provides certainty also in tax matters is conducive for the promotions of investments, growth and job creation.”

Pierre-Yves Fux said signing the protocol was “a little, but important milestone in our relations”.

“This treaty is a tool to strengthen the framework for our financial and economic relations and also a tool to create worldwide a safer environment with regard to financial and other transactions.

“I hope that having a very good framework for our trade and commercial relations will be thanks to such a protocol and continue to develop our very good and bilateral relations on all levels, political, tourism, culture, and of course the financial aspect.”

On the negotiations with Russian concerning a request by Moscow to amend the Double Taxation Treaty with Cyprus, Petrides said he expects them to conclude in the coming weeks.

Russia requested a renegotiation of the Double Tax Treaty (DTT) agreement, asking for an increase in the withholding on tax rates on dividend income from 5% or 10% (subject to conditions) to 15%, and on the interest income from 0% to 15%.

“We are in constant communication with the Russian authorities and negotiation are in progress,” Petrides said.

“From the outset, we have stated our will to find a mutually agreed solution to the matter.”

He said Cyprus has requested “some exemptions and other issues.”

“For us, it is very important the position stated by the Russian side that the treaty will not only concern Cyprus but also other jurisdictions must be implemented.”