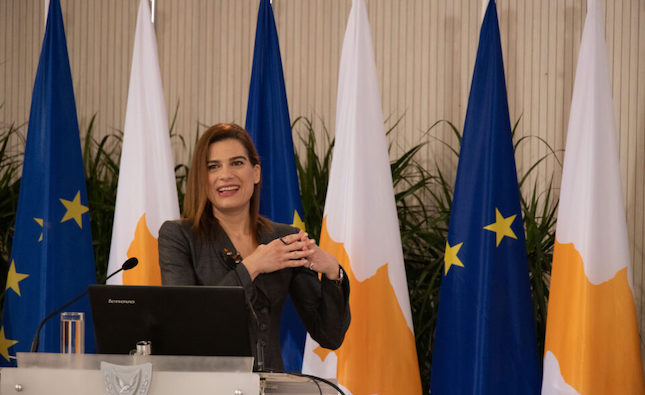 The European Union acknowledges the role Cyprus can play as an alternative energy supplier in the coming years as the bloc looks to reduce its dependency on Russian natural gas, Energy Minister Natasa Pilides said on Tuesday.

Speaking in parliament, Pilides also put a tentative timetable – 2026 – for the monetisation of the Aphrodite gas reservoir in block 12 of Cyprus’ Exclusive Economic Zone.

She was briefing MPs on the outcome of the emergency meeting of EU energy ministers held a day earlier in Brussels, as the bloc strives for a united response to Moscow’s demand that European buyers pay for Russian gas in roubles or face their supply being cut off.

Russia halted gas supplies to Bulgaria and Poland last week after they refused to meet its demand to effectively pay in roubles.

Pilides spoke of a “highly positive climate” in Brussels, and noted that the joint declaration issued later stressed the significance of securing alternative sources of energy.

“Therefore we consider important Cyprus’ interventions as well as the final result,” she said.

She also referred to the “very constructive” video-conference call she had last week with the European Commissioner for Energy.

During that discussion, Cyprus was asked to submit “a detailed plan” about the island’s role in the EU’s energy diversification drive.

Pilides also said she has written to the EU Energy Commissioner explaining the opportunities afforded by Cyprus’ offshore gas discoveries and the ways the gas could be exported to Europe.

Asked by journalists whether Cyprus will make use of its gas reservoirs now that the EU urgently needs supplies, Pilides said “this is the effort”, adding that a mooted pipeline to Turkey remains a highly difficult enterprise on a technical and financial level.

On the export options for Cypriot gas, the minister said the reservoirs could be linked to pipelines ending up in Egypt, either together with Israel or separately.

The government is holding contacts with the companies who already use pipelines transporting gas from various gas reservoirs to Egypt’s receiving infrastructures. At the same time, “advanced discussions” are underway among the companies, as they would have to become involved to develop the necessary infrastructures within the timetable set – three to four years.

The Aphrodite reservoir remains the primary objective, Pilides said. Meanwhile more gas discoveries – such as at the Glaucus site in offshore block 10 – would make development easier.

Sounding a confident note, Pilides described Cyprus’ gas development plan as “very tangible.” She noted that this summer, seismic surveys will be carried out in block 5 – a concession recently awarded to a consortium of ExxonMobil with Qatar Petroleum.

“Yes, there exists the intention to speed up and follow a schedule that has tangible results,” Pilides said. “We are also waiting for Chevron [who have the concession on Aphrodite], whom we will meet again soon, on the 13th of this month, to see their plans in greater detail.”

Responding to another question, Pilides revealed the government is mulling extending a temporary reduction on excise tax on motor and heating fuel. The measure, intended to give consumers some relief from soaring fuel prices, was introduced in March and will run through June 1.

Now this decrease could be extended beyond June 1, Pilides said.

The finance ministry is likewise considering prolonging the temporary decrease in VAT on electricity for domestic (non-commercial) use.

On whether fuel importers in Cyprus jack up their rates before receiving new cargos that are priced higher, thus taking advantage of consumers, Pilides said the government’s tracking of the market does not appear to bear this out.

She said fuel deliveries arrive here every two to three weeks, and the checks done do not show profiteering on the part of importers.

The ministry is using specialised software that monitors and analyses market prices.