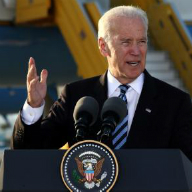 Cyprus to become key player in the region

Visiting US Vice President Joe Biden says Cyprus is a key partner in a challenging region, but can be an even stronger partner if the next generation can grow up without the burden of conflict.

“You are emerging as a leader in the region and Cyprus is poised to become a key player in the Eastern Mediterranean” transforming it into a new global hub for natural gas and markets, he said, adding, “You are uniquely situated at a critical time in modern history.”

He repeated the position that Cyprus is a “genuine strategic partner” of the US, cooperating on all the “biggest issues of the day” including Syria’s chemical weapons, non-proliferation of nuclear weapons and the Ukraine crisis.

“This is not just a strategic partnership, it’s a growing partnership,” Biden said, adding that the two countries could achieve even more with a Cyprus solution.  For his part, Anastasiades hailed the “landmark visit of real historical significance”, noting that Cyprus has proved to be a “stable and reliable” partner to the EU and US.

Referring to the potential role of hydrocarbons to transform the regional geopolitical landscape and increase energy security, Anastasiades said Cyprus expected from its strategic partner “to secure our sovereign rights to explore and exploit the natural resources in ourExclusive Economic Zone. To this end Mr Vice President, I have no doubt that we will receive the support of the United States”.

Biden ended his two-day visit to the island – the first by a US vice president in 52 years – with rousing words despite the absence of any concrete announcement on the much-hyped confidence-building measures (CBMs).

“People have asked me, what’s in this for the US? I tell you, President (Barack) Obama and I believe that Cyprus is a key partner in a challenging region. And we know it can be an even stronger partner if the next generation of Cypriots can grow up without the burden of conflict,” he said.

“That would expand people’s horizons to dream of something much bigger. It’ll unlock their talents, liberate them to remarkable things,” he said.

Biden led a US delegation including Amos Hochstein, deputy assistant secretary for energy diplomacy, in a bilateral meeting with Anastasiades and his ministers of finance, energy and foreign affairs, the undersecretary to the president, government spokesman and Cypriot ambassador to Washington. The meeting lasted almost an hour and a half and was followed by lunch attended by the ‘great and the good’ of Cypriot politics.

In the afternoon, Biden met with Turkish Cypriot leader Dervis Eroglu for an hour in the north at the ‘palace’ residence. No flags or symbols of the breakaway state were visible, as feared by the smaller Greek Cypriot political parties.

Sporting sunglasses, Biden appeared to avoid the traditional photo-op, despite a request by Eroglu. Instead, he simply waved to the cameras, turned and walked indoors.

Following their meeting, Eroglu told reporters the two discussed the Cyprus problem, natural gas and confidence-building measures (CBMs) in general. “The name Varosha did not come up,” he said.

After spending some time with members of the business community and civil society from both communities, Biden hosted a dinner for the two leaders and UN Special Representative Lisa Butttenheim at Nicosia’s Chateau Status in the buffer zone, bringing his own chef for the occasion. The two leaders’ negotiators were also present.

What was meant to take two hours, lasted three, sparking a number of theories as to what may come from the penned in media, waiting behind the Ledra Palace Hotel for the dinner to finish.

When Biden finally appeared at 10 pm with the leaders, negotiators and Buttenheim in tow, he borrowed from the bible to stress that other options do exist for Cyprus.

“The fact that we break bread tonight in the heart of a beautiful ancient city but also in the buffer zone that separates one Cypriot community from the other, reminds us that things were not always as they are now. They do not have to remain the way they are now. A better path is open.”

After getting a three-hour taste of Cyprus problem negotiations, Biden said compared to all the difficult conflict negotiations he’s been in around the world, he was “truly impressed by the cordiality and ease with which both leaders speak to one another and negotiate with one another”.

During the dinner, both leaders confirmed the common objective of the reunification of Cyprus as a bizonal, bicommunal federation, he said.

The vice president said the two shared common ground on certain aspects and differences on others, but not “irreconcilable” differences. “There’s clearly a lot of work to be done but what I’m hearing gives me hope that a solution is within reach this time.”

Regarding the outcome of the extended dinner, Biden announced that the two leaders reaffirmed their full commitment to the February 11 joint declaration. They also agreed to speed up the process for a comprehensive settlement, which remains their priority, consenting to meet at least twice a month.

According to Biden, they also agreed to intensify work on preparing meaningful CBMs and to revitalise the bicommunal technical committees to improve the daily lives of Cypriots from both communities.

“The two leaders also agreed to jointly call upon all those who have any information on missing persons to share that information with the Committee on Missing Persons in order to assist the committee in advancing its work,” said Biden, adding that additional resources will also be provided.

“For our part the US will engage with all stakeholders to explore mutually beneficial initiatives to reinforce settlement negotiations,” he said.

Once the leaders turned and left Biden alone on the podium, he lightly touched on the issue of financing a master plan on Famagusta, saying the US encourages the leaders to discuss a package on Varosha and Famagusta.

“If the two sides were to agree on this, the US would stand ready to assist on implementation.” The US also wants to see “quick and substantial progress” on core issues to lead the talks to the final phase, though ultimately, he warned, “the solution cannot come from outside”. A solution has to come from the two leaders and from the “compelling voices” of civil society.

Biden said the two leaders were committed to prove the “doubters” wrong, and recited from a poem by Ireland’s Seamus Heaney: “History teaches us, he said, not to hope on this side of the grave. But once in a lifetime the longed-for tidal wave of justice rises up, and hope and history rhyme.”

Before leaving for the airport, he concluded: “For the sake of the boys and girls born on this island who deserve the possibility that only peace can bring, let’s finally make hope and history rhyme together.” Earlier in the day at the Presidential Palace, Biden highlighted in a toast that time and circumstances have given Cyprus a significant role to play in the region.