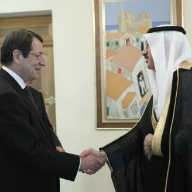 President Nicos Anastasiades said that his decision to appoint a resident Ambassador to the Kingdom of Saudi Arabia was a step which reflects Cyprus' desire to deepen political, economic and diplomatic ties with the country.

Receiving the credentials of the Ambassador of the Kingdom of Saudi Arabia Essam Ibrahim Bait Almal, he assured him that despite the effect of the economic crisis, the government was determined to continue to work hard to restructure and reform the economy.

He pointed out that Cyprus remains a destination with great potential for investments due to its diversified open-market economy, its strategic location at the crossroad of three continents, its well-developed infrastructure, competitive tax system and highly qualified human capital. He added that, the potential emanating from the discovery of hydrocarbons in Cyprus’ Exclusive Economic Zone (EEZ), has opened new opportunities and enhanced the role that Cyprus seeks to play in its greater neighbourhood.

“Saudi Arabia is a priority partner for Cyprus because of its leading role in the Muslim world and the Middle East. In recent years, our two countries have been working to improve the framework for promoting trade and economic relations between them. Negotiations for a Double Taxation Agreement began in 2014. The potential between us is considerable and has to be further explored”, stressed the President.

He also said that the Kingdom of Saudi Arabia was an important Arab ally in the coalition against DAESH and the country is actively contributing to the international community’s fight against terrorism in all its forms.

Concerning the Cyprus problem, the President referred to the recent assumption of the leadership of the Turkish Cypriot community by Mr Mustafa Akinci which – as he said – creates expectations and hopes for cooperation and joint collaboration, through engagement in substantive negotiations, with good will and determination, to finally reunite Cyprus, free from occupation forces.

At the same time he reiterated his strong belief in the adoption of confidence-building measures, aiming at building trust and good will between the two communities, thereby, providing a much needed stimulus to the prospect of reaching a settlement.

He expressed the hope and expectation that Turkey, which still military occupies the northern part of Cyprus, would demonstrate genuine political will and negotiate in good faith, so as to contribute constructively to the efforts to reach a settlement as soon as possible, not only in theory and rhetoric, but through practical and substantial actions.

The President expressed his earnest appreciation and thanks for the principled stance taken by the Government of the Kingdom of Saudi Arabia in the discussions on the resolution on the ‘Situation in Cyprus’ during the 42nd session of the Organization of the Islamic Cooperation (OIC) Council of Ministers of Foreign Affairs.

On his part the new Ambassador said that he is the first appointedAmbassador of the Kingdom to Cyprus after a long absence. “The Government of the Kingdom of Saudi Arabia has great interest in its relations with the Republic of Cyprus, and I have been instructed by the Saudi leadership to spare no efforts in order to develop these relationships to the highest levels. I will start from now to work hard to achieve this goal, which is undoubtedly a common wish of both sides”, he added.

He added Saudi Arabia appreciates the positions of the Government of Cyprus and its historic support of the Arab issues, especially the Palestinian issue and its commitment to resolving the issue according to the rules of justice, equality and the resolutions of the United Nations.

Likewise, he said, “the Kingdom is following the Cypriot issue with the same consideration and supports its solution in accordance with the resolutions of the United Nations; it also hopes that the international community pays the deserved attention to the issue.”