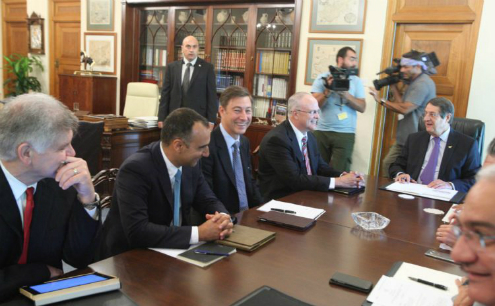 Cyprus is trying to expedite development of an offshore gas field with a view to supplying the Egyptian market, Energy Minister Yiorgos Lakkotrypis said recently.

Speaking after a meeting between President Nicos Anastasiades and a delegation of the consortium – Noble, Shell, and Delek – that owns the concession, Lakkotrypis said they discussed the latest developments regarding the Aphrodite reserve, especially in light of the prospect of selling natural gas to Egypt.

“These are the maters being discussed as regards the development and production plan, the timeframes, which we are trying to find ways to shorten, because it is to everyone’s interest, but also to have a commercially viable project,” Lakkotrypis said.

He avoided directly answering a follow-up a question as to whether a firm or tentative timetable has been set for monetising the Aphrodite gas field.

Responding to another question, the minister clarified that the plan is for Aphrodite to be developed alone, rather than as part of a broader project involving more than one gas fields.

“The Aphrodite reserve is autonomous. Let us not forget that the consortium now includes stakeholders who are active only in Cypriot maritime waters,” he said.

Whereas Noble and Delek are active in both Cypriot and Israeli offshore projects, neither is involved in Egyptian waters.

Moreover, Lakkotrypis was among the officials who had earlier suggested that the Aphrodite and Zohr gas fields could be linked up into a single pipeline ending up in Egypt. That idea has now been abandoned, judging by Lakkotrypis’ comment that Aphrodite is to be developed as a standalone project.

On Wednesday, Cyprus and Egypt signed a deal for the transfer of natural gas via pipeline to Egypt, once extraction starts at Aphrodite, which holds an estimated 4.5 trillion cubic feet of gas.

In a joint statement, the two countries said the deal would allow a direct subsea pipeline from Cyprus’s exclusive economic zone (EEZ) to either Egypt’s EEZ or onshore Egypt, for domestic consumption or re-export – it did not specify which.

Noble Energy CEO David Stover said the agreement with Egypt was going to be helpful because such deals made the projects work.

As regards the timeframes, Stover said there was a number of things that have to come together as far as the timing was concerned.

“One of the big things is we are continuing to work on how we identify the cost and firm up the cost of the project, I think it is a great market opportunity right now with very few big projects in the world moving forward, to continue to have an opportunity to develop this project in a window that is the most efficient from a cost-stand point, so we are looking very hard at what those costs would be for the project,” he said.

He added that developing the market was another key issue.

“There is a lot of effort going in to just establishing where would you sell the gas and what price would you have to support the project.”

A careful reading of Stover’s remarks dispels the positive spin that local media put on the meeting.

The Noble CEO never mentioned Egypt or any other market specifically, talking only about “the project” – meaning Aphrodite.

“This is quite telling,” energy analyst Charles Ellinas told the press.

“When Stover speaks of a ‘great market opportunity’, he’s right, but you have to read the subtext. On one hand, it’s true that construction costs for such infrastructure projects have come down, because contractors and construction companies are currently bidding for a smaller number of projects worldwide.

“But on the other hand, even if the construction cost of Aphrodite were to be lowered by 20%, the oil companies would still have to find – borrow – the money, since we are talking about billions.”

Ellinas notes for example that Shell – the big player in the Aphrodite consortium – spent some $50bn to buy out BG, and is now seeking to offload some $30bn worth of assets to pay for that acquisition.

Shell has also stated publicly that they aim to minimize spending – including cancelling projects – and focus on dividend payouts.

And Noble is currently making losses.