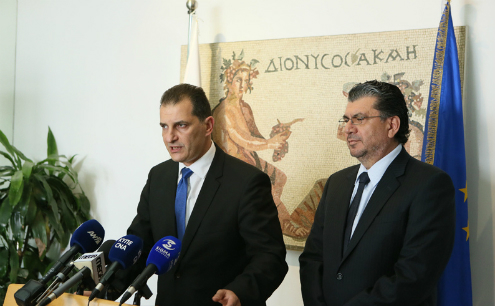 Cyprus to sell gas reserves by 2020

Cyprus expects to begin exporting natural gas around 2020 if all goes according to schedule, says trade and energy minister.

Trade and energy minister Giorgos Lakkotrypis said, under a road map drawn up by his ministry, the final investment decision for a liquefied natural gas plant – the cornerstone of the island’s energy policy – will likely be taken in 2015. He was speaking at a press conference in Nicosia, having had earlier in the day outlined to the President and the Cabinet a preliminary road map for the development of hydrocarbons. This A to Z opens with Noble Energy’s appraisal drilling at the Aphrodite well – slated to begin this week – and closes with the export of gas, expected to occur in late 2019 or early 2020, said Lakkotrypis. He said confirmation of the gas estimates at Aphrodite – lying in offshore Block 12 licensed to Noble Energy– would be “a strong card” for Cyprus as it would allow the island to start sounding out long-term buyers for the gas, also paving the way to seeking financing for the LNG terminal.

The government wants to sign a memorandum of understanding with Noble for developing the LNG facility. The MoU is seen as precursor to an eventual deal establishing a joint venture between the Cyprus National Hydrocarbons Company (CNHC) and Noble, a special purpose vehicle to seek out investors for the plant. The intended deal relates to the construction of a single train at Vassilikos of five million tonnes per annum. Should the gas estimates for the Aphrodite well pan out, Lakkotrypis said, Noble would declare commerciality on the prospect, a move that would attract investors for the LNG facility. And assuming gas were discovered in other concessions, the process would be repeated with other concession holders forming additional joint ventures with the CNHC in the LNG project with the construction of more trains at the plant. Still, Lakkotrypis stressed, the estimated reserves within Aphrodite alone – some 7 trillion cubic feet – are sufficient to make the LNG project financially viable. But, theminister stressed, proving the reserves in Block 12 is key. It will allow Cyprus to seek long-term contracts for gas sales, and in turn the contracts would be used as collateral against borrowing money for the multi-billion euro LNG plant. “These contracts will not be revenues per se, but they will be a strong card allowing us to finance infrastructure projects and thus bring about economic growth earlier,” he said.

The search for investors in the LNG plant would start in early 2014 and end later that year, while the final investment decision would be taken in 2015. Asked who would finance the LNG project, the minister said already a number of “economic giants” have expressed interest. He did not elaborate, except to say that the interested parties came from both inside and outside the European Union. Responding to another question, Lakkotrypis ruled out advance sales of gas. He explained that as long as gas reserves are unproven they are worth very little, but once they have been confirmed their value grows exponentially. The minister predicted that Total – which has concessions in blocks 10 and 11 – would itself conduct exploratory drilling by late 2014. The French oil giant is planning to run seismic surveys of the seabed this year. Meanwhile in an interview yesterday with the Cyprus News Agency, CNHC chairman Charalambos Ellinas said Cyprus has a possible ‘Plan B’ in case the reserves at the Aphrodite well turn out to be lower than estimated. Should the well yield less than 6 tcf of gas – the ‘threshold’ for making the LNG plant commercially viable – this shortfall could be made up through discoveries in a second, smaller field within Block 12 that could hold around 2 to 3 tcf, Ellinas said.