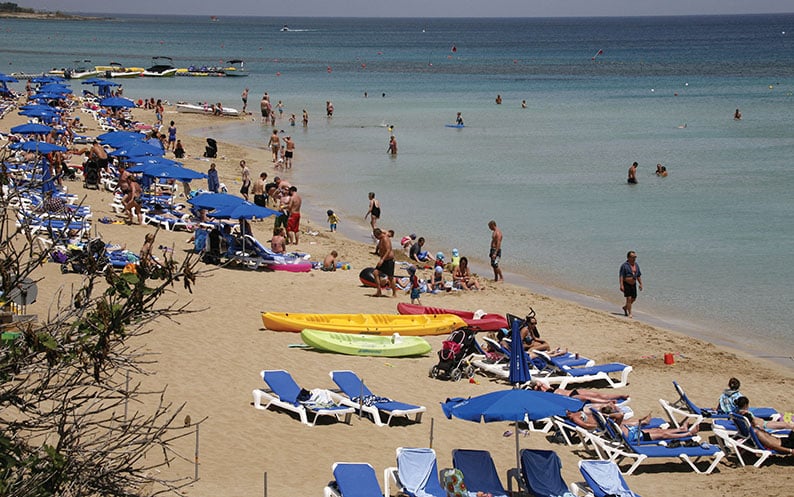 New Eurostat figures have highlighted the dependence of Cyprus tourism sector on foreign visitors at a time when the coronavirus outbreak has put a lid on travel.

These show that 95% of nights spent at tourist accommodation in Cyprus in 2018 were attributed to non-residents, a trend shared by Mediterranean islands Crete and Malta (both 96%).

Aside from coastal and island destinations, non-resident tourists also accounted for a fairly high proportion of the total nights spent in the mountainous western Austrian regions of Tirol and Vorarlberg, as well as several capital regions, for example Prague, Budapest, Vienna and Brussels, Eurostat said

Cyprus’ tourism has been battered by the Covid-19 pandemic with hoteliers warning that the worst -case scenario of only a fraction of foreign arrivals seems increasingly likely.

Last year welcomed a record 4 million tourists. The deputy ministry of tourism has set a target of 20% of that number for this year, but with Russia and Israel, two of Cyprus’ biggest markets currently excluded, and coronavirus certificates required from the biggest market UK, prospects appear increasingly grim.

Efforts are underway to encourage more local tourism with special offers at tourist establishments participating in a scheme sponsored by the deputy ministry although with summer over and schools reopened, they face an uphill task.

According to Eurostat, in 2018, the number of nights spent in EU tourist accommodation amounted to 2.8 billion, out of which residents of the destination country accounted for 52% and non-residents for 48%.

However, this picture may look different in 2020 as a result of the travel restrictions as well as other precautionary measures taken in response to the Covid-19 pandemic, it said.

To still be able to discover the world, travellers might need to adjust their holiday choices. It is likely that they are looking for destinations closer to their home and easier to access. As a result, EU regions with higher foreign tourism dependency might be more severely hit by the effect of the Covid-19, though this negative effect may be partly offset by substitution effects in domestic tourism.