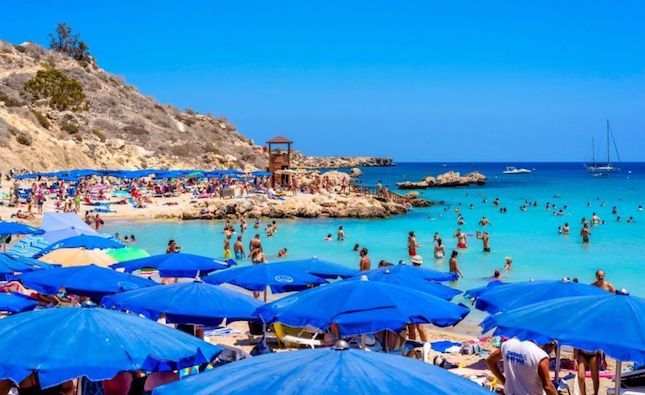 But one key nationality is effectively missing: Russian visitors, as the once lucrative market has been hit by European Union sanctions imposed after Moscow invaded Ukraine.

The Russian market “was wiped out from one day to the next”, said Christos Angelides, head of the Pancyprian Association of Hotel Managers.

“Nobody was prepared for this huge change.”

The key tourism sector contributed €2.68 billion in 2019, 15% of GDP, and is still counting the cost of the disastrous years of COVID travel chaos.

In 2019, before the start of the COVID-19 pandemic, one-fifth of the tourists were Russians — 782,000 out of 3.97 million — making it the holiday island’s second largest market after Britain.

Last year, despite tough COVID travel restrictions, that share rose to more than 25%, with arrivals from Russia totalling nearly 520,000 out of 1.93 million.

Operators had hoped this summer would see Russian numbers return to pre-pandemic levels.

Some 18,000 Russians reside in Cyprus, many in Limassol — dubbed by some “Moscow on the Med”.

But, with EU sanctions on Russia continuing and with no let-up in the bloodshed on Ukraine’s battlefields, just 17,000 Russian tourists came to Cyprus between January and June.

“Our hotel is doing well, but others — who had 100% Russian clientele — are not,” said Angelides, who is also the Napa Mermaid Hotel manager.

Nicosia and Moscow have close political and cultural ties, but when Russia sent troops into Ukraine, the Cypriot parliament unanimously passed a resolution condemning the invasion.

Cyprus, the EU’s most easterly member, backed the bloc’s actions on Moscow, including a flight ban and sanctions barring some Russian banks from the SWIFT financial system.

Overall, tourist arrivals in Cyprus are bouncing back, thanks to strong demand in other key markets following the lifting of coronavirus restrictions.

From January to June, Cyprus recorded 1.2 million visitors, nearly five times the level last year, and the white sand beaches at Ayia Napa are crowded with sunseekers and partygoers.

“We have somewhat limited the damage, but it is impossible to replace this huge number of customers,” Angelides added.

In the first half of this year, British tourists made up nearly two-fifths of visitors, followed by Israelis, making up 7% of visitors, then Poland, Germany, and Greece.

“There have been many attempts by several sectors to encourage tourists from other markets, such as the German, Polish, Italian and French markets,” said Charis Papacharalambous, spokesperson of the Association of Cyprus Travel Agents.

But it was still “very difficult to fill the big gap” left by Russian tourists, he added, with industry experts fearing the impact may worsen since many Russians previously preferred to visit later in the year.

For Loizides, the war in Ukraine has also provided another problem.

With tourists turning the air conditioning on full blast to counter the sweltering heat of Cyprus, hotels are struggling with “astronomical bills”, Loizides said.

“The EU must remedy this situation and help companies, especially at a time when inflation is raging.”