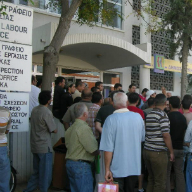 The drop in the unemployment rate in January to March compared to the first quarter of 2015 was mainly the result of a drop of the number of unemployed from 75,568 to 57,582, Cystat said in its labour force survey on its website on Friday.