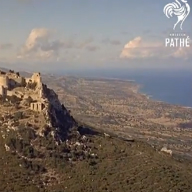 The legendary British newsreel service Pathe has recently uploaded thousands of videos on Youtube, with many films featuring Cyprus - some dating back to the earliest decades of the 20th century.

More than 85,000 historical films have been put on YouTube for free, by Pathe, which was once the world leader in news features at cinemas.

The collection includes a 1965 colour travel film shows stunning aerial shots of the Cyprus coast, Kyrenia harbour and St. Hilarion. Other films include the ‘Situation Now In Cyprus’ filmed in 1956 and rare footage of Jewish immigrants disembarking from British ship ‘Empire Rival’ in 1946 and boarding landing craft to take them to camps in Famagusta.

One of the oldest newsreel film companies in the world, Pathe’s stylized clips were often shown in cinemas, right up until the 1970s.